Was Phil Mickelson right all along!? Xander Schauffele reacts...

Xander Schauffele has offered his opinion on whether or not LIV's Phil Mickelson "was right" after huge changes have been made by PGA Tour. 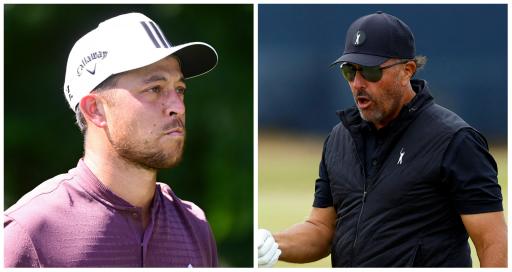 These days it's fair to say that Phil Mickelson, the de facto face of the LIV Golf Invitational Series, appears slightly different in media appearances.

In the past, he would have had absolutely no problem in ripping a governing body to shreds or offering his opinion on any given topic.

He was a larger than life character. Now, he is taking a very deliberate approach not to say anything too controversial. At least, in this writer's opinion, we have a watered-down Phil.

Perhaps that's because there is a trial looming. But also, this could be the result of the therapy he is having to work on - as he put it - his "deficiencies".

He did, however, manage to get in this not-so-subtle dig recently.

There is absolutely no denying that LIV Golf has caused more than a ripple in the golf world. Obviously, one of the big talking points in this whole saga is money. It's probably the only talking point, in fairness.

It's clear that Mickelson thought the players were being short-changed. In his now famous remarks to Alan Shipnuck of The Fire Pit Collective, he argued that he believed the Tour were illegally holding players' money when talking about their reserves.

Aside from a huge TV deal, PGA Tour commissioner Jay Monahan conceded that some of the bumper prize money will be taken from their reserves.

Which begs the question, was Mickelson right?

Xander Schauffele recently joined Golf's Drop Zone podcast where he offered his opinion on Lefty. The 28-year-old American was widely linked with a move to LIV. But for now at least, he appears to be staying put.

"I think recent articles come out, where people were like, 'well he wasn't too far off, he just said some unsavory things.

"It's unfortunate that he wasn't able to get his point across or his point was taken kind of aggressively. Not out of context, but without him really knowing. It's sort of every player's nightmare, I guess — that's why we get scared to talk to you guys."

He continued: "He said what he said, so in terms of feeling bad for him, it's hard. But at the same time, whether he was emotional and behind closed doors, that's one thing.

"He knew it would take something drastic, and he had to pick which side of the fence he wanted to be on.

"He's been such a staple on the PGA Tour and such a staple in our game of golf, that it's… I don't hold anything against him or think of him much differently. Regardless of what people have written about him.

"The main points he was trying to make, and what he really wanted in his vision, you know maybe we're living it out now on the PGA Tour.

"It's unfortunate he isn't a part of that, because this is what he so wanted."