LIV Golf for women? You'd be MAD not to consider it, says Charley Hull

Charley Hull, who recently claimed her second LPGA Tour victory, says "you'd be mad not to consider it" if hypothetically there was a women's LIV Golf. 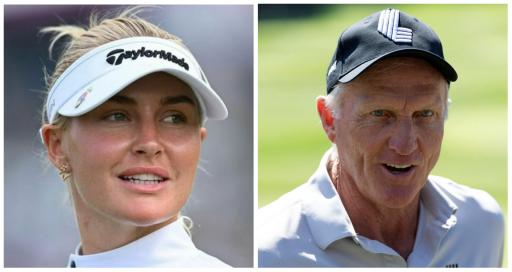 LPGA Tour star Charley Hull says "you'd be mad not to consider it" if she was presented an opportunity to play in a LIV Golf league for women.

Hull, 26, recently captured her first title in nearly six years at The Ascendant, which reduced her to tears as she was doused in champagne by her good friend Georgia Hall.

She went on Sky Sports on Friday to speak about that one stroke victory over China's Lin Xiyu and New Zealand's Lydia Ko at the Old American Golf Club in Texas.

It was her second ever LPGA Tour win after capturing the 2016 Tour Championship. Hull also has three wins on the Ladies European Tour but is yet to taste victory at a major.

"Well I haven't heard anything yet, but at the end of the day I think you'd be mad not to consider it, but I'm pretty happy with the LPGA Tour and I love it there," Hull said when asked if  - hypothetically - there were to be a LIV Golf for women.

"You'll be mad not to consider it."

Charley Hull admits she'd consider playing on the LIV Tour if given the opportunity...pic.twitter.com/UTk41xdKun

This topic has been spoken about before by LIV Golf chief executive Greg Norman.

Speaking before LIV Golf Bangkok, where the breakaway tour is debuting in Asia with a $25m event, The Great White Shark admitted that working with the LPGA was "at the forefront of my mind".

He poured cold water on suggestions anything could happen in 2023, hinting that he was fully focused on launching the $405m LIV Golf League.

Related: The next LIV Golf signees? Here are the rumoured players...

Previously, LPGA Tour commissioner Mollie Marxcoux dismissed any suggestions they had discussions with Norman, despite claims to the contrary.

However, she did say in July to Golfweek's Beth Ann Nichols that she would "engage" in a conversation if it would "achieve our aim of promoting women's golf, but there needs to be input from players and sponsors. There's a lot of factors to consider before we do business with LIV Golf."