Ted Scott has revealed exactly what was said when Scottie Scheffler four-putted the final green at Augusta National. 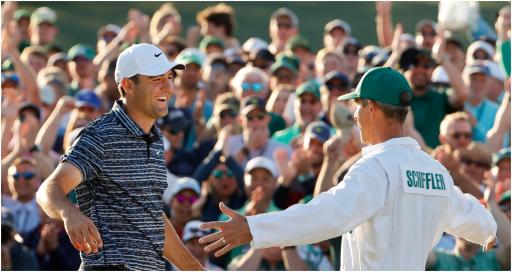 Scottie Scheffler's caddie Ted Scott has revealed the hilarious conversation he shared with his player as the 25-year-old four-putted the final green at Augusta National to win The Masters.

Related: How much has Ted Scott earned on the bag with Scottie Scheffler?

Scheffler won the first major of the year by three strokes. It was a truly dominant performance by the sparkling talent and his margin of victory should have been more had he not four-whacked the final green.

The youngster dealt with the moment the way he only knew how: by laughing. Scheffler finally tapped his ball into the cup before embracing Scott, who previously was on the bag for Bubba Watson during both of his Masters wins.

Scott joined SiriusXM PGA Tour Radio to discuss what exactly was said between the pair in that moment.

"I said, 'look, just nestle it down there,' and he putted it like 5 feet by and goes sorry, dude, I really wanted to make it."

"You know, he putted the first one and then I said, 'Look, just nestle it down there' and he putted it like five feet by," he said.

"He goes, 'Sorry, dude, I really wanted to make it, so he wanted to birdie it, this dude right here.

"He's putting down there to win The Masters. So we read the next one -- we read it inside left -- and he said, 'It went left!'

"I'm like, oh okay, this one is straight in so knock it in and you can clearly see he left the blade open on that one.

"So now, he walks to the fourth one and he's laughing and he goes, 'How many putts do I have?!'