Masters: Laird has omens in his favour

Scot looking to follow in footsteps of compatriot Lyle 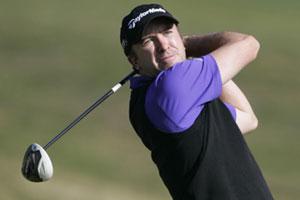 100/1 says Martin Laird will make it six. But if you’re into your omens, you may want to lump on the Scot - one of Golfmagic's outside tips - at Augusta National this week.

Laird, the last player into the first major of the season following his third PGA Tour win at the Texas Open, arrived in Georgia late Sunday on a flight charted by the event’s organisers.

He bunked the first night at a house rented by his management company that was being shared by 1988 Masters champion Lyle, who waited up for his fellow Scot.

“Obviously, it would be nice to emulate Sandy,” said Laird. “I’m certainly coming here with confidence, so we’ll see what happens.

“My plans obviously changed quickly and I didn’t have anywhere to stay last night, but my management company, Hambric Sports, had a spare room.

“Sandy is staying there and he was waiting for me when I got in. He told me it was the 25th anniversary of his win and how he had won the week before Augusta in Greensboro.

“We didn’t talk for too long. It was late, I didn’t get to the house until about 11:30pm and as you can imagine I was a bit tired. We opened a bottle of wine and had that and then I went to bed.”

And here’s where things get really spooky. Laird then woke up on Monday and visited a local fast-food restaurant. He later learned Lyle had eaten the exact same meal on the Monday before his victory in the 1988 Masters.

Click here to read our definitive preview of the 2013 Masters Tournament or head to our FORE! to Watch feature to see who we think is going to be slipping on the Green Jacket come Sunday. Twitter user? Join us via @Golfmagic for all the latest Masters discussion.