Greg Norman says he has filled out his entry form but will need to be granted a special exemption. 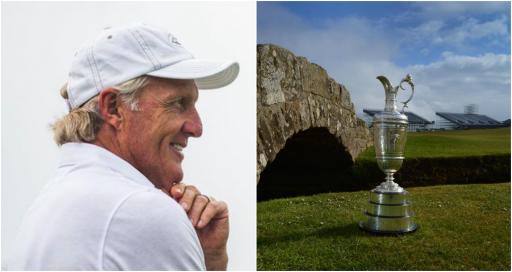 Greg Norman says he is planning on coming out of retirement to play the 150th Open at St Andrews.

Two-time Open winner Norman, 67, has told an Australian newspaper that he was filling out his entry form.

The Great White Shark has not played professional golf in more than 10 years and in recent times has cut a controversial figure as the CEO of LIV Golf Investments.

LIV Golf Investments have announced the formation of an eight-event $255million global series this year which is being bankrolled by the sovereign wealth of Saudi Arabia.

They are also bankrolling golf tournaments on the Asian Tour.

Critics suggest the kingdom is attempting to sportswash its global reputation.

Several elite players – including Rory McIlroy – have spoken out against the formation of the league in the past and have since pledged their allegiances to the PGA Tour.

Other players such as Bryson DeChambeau and Dustin Johnson were reported to have been extremely interested in jumping ship.

Several players made dramatic U-turns and released statements saying they would not be joining the league in the wake of Phil Mickelson’s comments.

Mickelson had suggested that he was willing to leverage the Saudis against the PGA Tour as it was a “once in a life time opportunity” to re-shape the American tour.

Norman says he still has several high-profile players who will join the league and that in the future other players will do so too when they get jealous of the prize money on offer.

More: PGA Tour rookie says he was in a car crash

He told the paper: “I’m filling out my entry form now, I think I’m going. I think I can still get in.”

Exemptions to the Open are only given to former champions under the age of 60 so Norman would have to qualify or be granted a separate exemption.

Norman continued: “It’s the 150th. I’m a past Open Champion. I love St Andrews. If there’s a moment in time that I would consider going back and teeing off one last time, maybe this is it.”

He added: “There’s so much goodness about the golf course [St Andrews] and it’s stood the test of time.”