Ian Poulter was on the receiving end of a few jeers as he prepared to hit his opening tee shot at the 150th Open Championship. 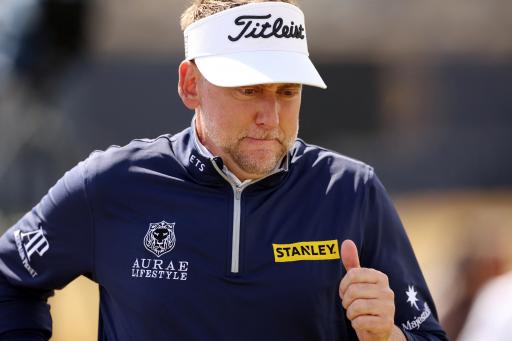 The Englishman was reportedly on the receiving end of a few jeers from the crowd at St. Andrews.

Then he snap-hooked his tee shot and almost missed the 100-yard wide fairway on the first hole at the Old Course.

Need we remind you that this is the widest fairway in golf?!

Poulter actually needed to take relief from a fence and it still impeded his swing for his second shot, but he managed to get the ball onto the green.

From there, he managed to make a safe par. But still, that was an interesting start.

Poulter, 46, took legal action after he was fined and suspended by the DP World Tour.

The Ryder Cup Europe icon claimed that he felt he has done “nothing” wrong in this whole saga.

Having been booed on the 1st tee @ 07:08 Ian Poulter managed to miss the biggest fairway in golf with a shot reminiscent of Ian Baker finch's famous OB. Being booed at the 150th #TheOpen at the home of golf must have got the mind racing about his choice to join the Liv golf tour pic.twitter.com/fNrCD8VZK7

Ian Poulter almost goes OB on his tee shot at the first hole.

Slumbers said it was not on their agenda to ban LIV Golf players from future Opens but they would look at the qualifying criteria going forward.

“There’s no such thing as a free lunch,” he said.

Before the 150th Open began, Poulter spoke to the media and said “being threatened” is not a nice position to be in.

But he said: “This has been my home for 24 years, why should that change?”

Even fellow LIV Golf player Graeme McDowell has said it has been “a rough couple of months”.

Phil Mickelson, who decided not to attend the annual champions dinner this week, fared a little better than Poulter on his first tee shot.

He wasn’t booed and striped his tee shot down the left side of the fairway.

Next page: Homa with the perfect reaction to dream Tiger pairing