Julie Crenshaw hit out at Bryson DeChambeau after he reportedly gave her husband unsolicited putting advice for Augusta National. 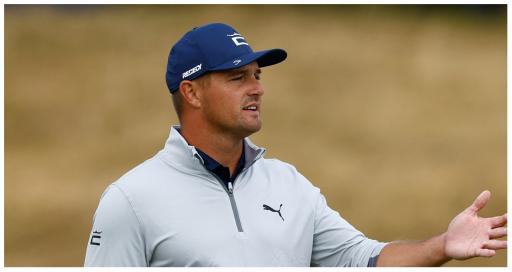 Julie Crenshaw, the wife of two-time Masters winner Ben, appears to have deleted her Twitter account after taking aim at Bryson DeChambeau.

Speaking ahead of the third LIV Golf event in Bedminster, which was won by Henrik Stenson, DeChambeau opened up on a number of topics.

One of those topics included the apparent deterioration of his relationship with the 15-time major champion Tiger Woods.

It was only last December that we saw Woods and DeChambeau laughing and joking at Tiger's Hero World Challenge in the Bahamas.

The pair appeared in good spirits as they played catch with a football. But it appears that his decision did not sit well with Woods.

Woods reportedly turned down a figure in the region of $700-800million to join LIV Golf. DeChambeau was persuaded for a figure north of $100million.

Read more about Woods' decision to turn down LIV Golf.

DeChambeau said of their relationship:

"We have been fairly close and unfortunately, we have not spoken, one day we will again, and I am always open for a conversation with anybody. I have no problem with it and I hope we can come see eye to eye on it."

If DeChambeau's PGA Tour ban is upheld, then it's highly likely that the next time we see the pair at The Masters.

But according to Julie Crenshaw, DeChambeau's playing days at Augusta National are numbered.

She took aim at DeChambeau on Twitter, saying: "And here's another truth for you @b_dechambeau you tried to tell my husband how you put Augusta greens. He was kind enough to listen to your BS. He’s got 2 jackets you have 0 next time maybe you should do more listening but then again your tee times at Augusta are numbered."

See the exchange below:

At of the time of writing, Crenshaw has since deleted her profile.

Her husband, who has the nickname "Gentle Ben" won his Green Jackets in 1984 and 1995. He won 19 PGA Tour events in his career. DeChambeau currently has eight PGA Tour wins.

It's unlikely he'll add to his total considering his defection to LIV Golf.

Though he did say that it would be "an honour" to play on the established American circuit again, highlighting the fact that he would cherish the opportunity of playing events that he has won like the Arnold Palmer Invitational and the Memorial.