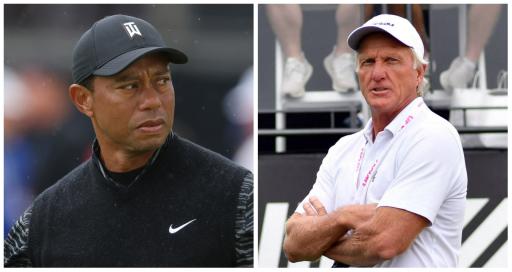 The true figure Tiger Woods turned down from LIV Golf was reportedly between $700-800m, according to Greg Norman.

Woods, 46, was reportedly approached by the Saudi-backed circuit even before Norman, 72, was announced as their chief executive late last year.

Swede Stenson, 46, fired shots after victory in his debut a week after he was stripped of the Ryder Cup Europe captaincy. "I think we can all agree I played like a captain," he said.

Norman told Fox News: "That number was out there before I became CEO. So that number has been out there, yes.

"And, look, Tiger is a needle-mover and of course you have to look at the best of the best."

He added: "So they had originally approached Tiger before I became CEO. So, yes, that number was somewhere in that neighborhood."

Unsurprisingly as an 82-time PGA Tour winner, the big cat has consistently spoken out in favour of the established circuit.

When the de facto face of LIV, Phil Mickelson, returned to major championship golf following his exile from the game after his controversial remarks about the Saudis and the PGA Tour were published, Woods hit out at Lefty.

Despite saying that the game missed Mickelson, Woods said that he "believed in legacy and major championships."

Woods went in hard on the LIV players before the 150th Open Championship at St Andrews, where he missed the cut.

What did Woods say about LIV Golf?

This is what Woods said about LIV at the 150th Open Championship:

"The players who have chosen to go to LIV and to play on -- to play there, I disagree with it. I think that what they've done is they've turned their back on what has allowed them to get to this position.

"Some players have never got a chance to even experience it. They've gone right from the amateur ranks right into that organisation and never really got a chance to play out here and what it feels like to play a TOUR schedule or to play in some big events.

"And who knows what's going to happen in the near future with world-ranking points, the criteria for entering major championships. The governing body is going to have to figure that out.

"I just don't see how, out of 54 holes -- I can understand 54 holes is almost like a mandate when you get to the Senior Tour. The guys are little bit older and a little more banged up. But when you're at this young age and some of these kids -- they really are kids who have gone from amateur golf into that organisation -- 72-hole tests are part of it. We used to have 36-hole playoffs for major championships. That's how it used to be -- 18-hole U.S. Open playoffs.

"I just don't see how that move is positive in the long term for a lot of these players, especially if the LIV organisation doesn't get world-ranking points and the major championships change their criteria for entering the events.