The big cat and big-hitting American look in good spirits in Albany, Bahamas. 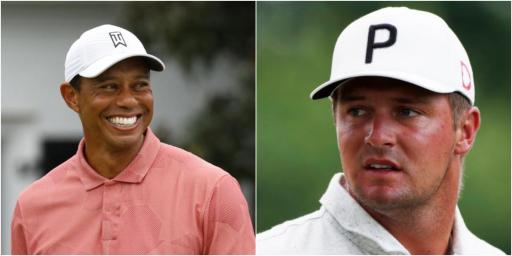 Tiger Woods told us at his much-awaited press conference this week he has missed hanging out with the guys.

He missed the jokes, the comradery. Life on Tour. Golf is Tiger Woods and Tiger Woods is golf.

Now he's back and looking in incredible shape. His arms? They're massive. "They got pretty jacked," Woods dryly remarked.

Woods is the tournament host of the Hero World Challenge and even though he's not playing he's the focal point.

Who cares that Rory McIlroy and Collin Morikawa are playing together this week? Woods is hitting golf balls again.

Really well, too. He was absolutely flushing it on the range. "If this is today...it's on," Trevor Immelman remarked.

It really is on. Notah Begay III, Woods long time pal, laughed when he was asked if the 15-time champion was serious in his comments.

That related to whether or not Woods had the desire to climb Mount Everest again to make it to the top.

Notah Begay, Tiger’s longtime friend laughed and said he doesn’t believe Tiger when he says that he won’t try to climb the mountain again pic.twitter.com/AOwqYjE7jn

"No, are you kidding me?! Not at all. This guy lives for the battle," Begay III said.

Woods was also pictured today by TMZ throwing around around a football with Bryson DeChambeau:

Tiger having fun with Bryson on the range yesterday. Good to see them enjoying themselves

It certainly looks as if they are having a good time. Woods actually fires on into DeChambeau with a bit too much sauce and, well...

"Oh my god I'm sorry," could be heard as DeChambeau looked as if the ball hit him in the stomach and below the belt.

The 82-time PGA Tour winner smacks his hands together and can be heard laughing.

Woods is the tournament host this week at the Hero World Challenge.

He spoke for 38 minutes at a press conference and then was the after dinner speaker on site, talking about his foundation.

It's fair to say the 15-time major champion hasn't skipped an arm day as continues his rehab from his car crash.

So, uh, Tiger’s looking almost as swole as Bryson… pic.twitter.com/2BcFcM7OWT