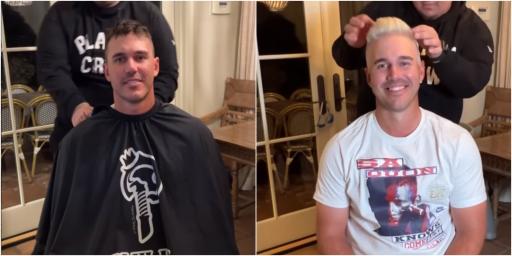 Will the real Brooks Koepka please stand up?

Those were the cries from PGA Tour fans who tuned into the Farmers Insurance Open last night to see a new-look Koepka.

Social media fans will have noticed something was in the air before his tee time. He changed his avatar to a picture of himself as young lad.

That image, too, featured blonde hair. Koepka, 31, battled his way to an opening 2-under 70 at the easier North Course.

Related: How much are Brooks Koepka and Jena Sims worth?

It left him 54th by day's end as Jon Rahm started strongly and Rickie Fowler returned to the form we know he is capable of.

Unfortunately, we didn't get to see much of Koepka throughout the coverage. Only a few shots here and there.

But we could see under the cap and golf fans were waiting patiently for the reveal by the end of play.

Then we saw it in all its glory. Koepka has reportedly been interested in doing this for a while.

We know he's into his fashion. He turned eyebrows before when he rocked up in a turtleneck in round one of the Tour championship.

Brooks Koepka looks like he ate Will Zalatoris pic.twitter.com/p92yxKMdSk

After his first round at the iconic venue, the comments started flooding in. Obviously, there were the Eminem comparisons.

The best comment GolfMagic saw came from Dylan Dethier who wrote that, "he looks like he ate Will Zalatoris".

Justin Thomas also reacted to his Instagram post. Soccer star Alex Morgan also wrote, "how can I unsee this?".

"When Alex Morgan dissaproves, you know it's beyond a mistake," another added.

Suffice to say, the new hairstyle has turned heads. Is it a PIP play? Did he lose a bet? Was it for the Netflix documentary?

Apparently, he just wanted to go blonde. "Blondes have more fun," he wrote.