Bryson DeChambeau's one-handed golf swing is probably better than yours

Bryson DeChambeau looks like he is recovering well from his surgery. 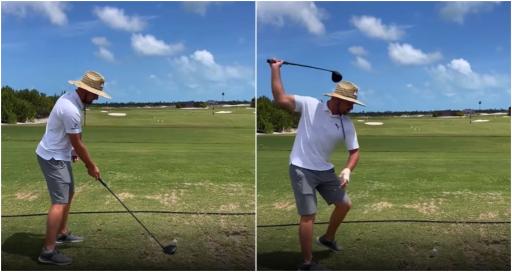 It didn't take too long for Bryson DeChambeau to get back into the gym after wrist surgery.

Related: Bryson DeChambeau opens up on letting himself and others down

Barely days had passed and the 28-year-old was posting videos of some leg and core work in his home gym with his left wrist all bandaged up.

But this most recent video displays just how good these PGA Tour pros truly are.

Uploaded on Monday, DeChambeau shows off by swinging a driver on the range with just one hand.

Even with just one arm to swing, it appears that DeChambeau can still absolutely send it. Just listen to that strike.

The Tour's longest driver seems in good spirits despite one of the most frustrating periods in his career with two niggling injuries.

DeChambeau told reporters at the Masters that he injured his hip a few years ago in his pursuit for more speed and power.

He aggravated that injury when he slipped and fell playing ping pong at the Saudi International and ever since it appears he's been trying to do everything to avoid going under the knife.

DeChambeau is expected to be out of action for around two months.

That means his appearance at the PGA Championship is in real jeapordy and it will likely be a race against time to see if he can participate at the U.S. Open.

DeChambeau was scheduled to play a long drive event after the first major of the year at the Masters.

The 2020 U.S. Open champion missed the cut at Augusta National and went for surgery.

He previously disclosed that he was defying doctors' orders to play the Masters.