Collin Morikawa on SGL: "Do I care who's going to be making money? No"

Collin Morikawa has reiterated his stance over the rebel league as he says he will play the Scottish Open. 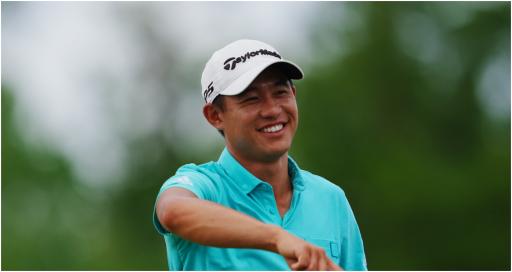 Collin Morikawa has reiterated his allegiance to the PGA Tour as he confirmed he will play the Scottish Open.

The 25-year-old World No.3 lifted the Claret Jug on his Open debut last year at Royal St George's.

But it was a missed cut a week before at The Renaissance Club which he says contributed massively to his major win because it made him realise he needed to make a change.

He told the media: "Those two weeks last year [before the Open] my game was in some of the best shape I could have had then at the Scottish I started hitting irons shots, nine irons to 45 feet, missing greens and it was just frustrating.

"I wanted to blame it on my clubs and rarely that's the case, but I really did and stuck with it, I made some changes at Royal St George's on the Monday and ended up winning."

Another topic on hand was of course the Saudi-backed rebel league that is called the LIV Golf Invitational Series. Eight events will take place globally starting from June culminating in the finale being held at Doral in Miami.

Phil Mickelson and a number of professionals have asked the PGA Tour for a waiver to participate in the first event of the schedule at Centurion Club in June.

Morikawa, like every player inside the top 100 of the OWGR, was reportedly targeted as a participant.

The PGA Tour previously issued threats of bans and in the wake of Mickelson's comments that led to his exile a number of elite Tour pros declared their allegiances.

One of those players included Morikawa who said his "alliance" was with the PGA Tour before the Genesis Invitational at Riviera.

Speaking in a media event ahead of the 150th Open at St Andrews, Morikawa said: "Look, I said at Riviera earlier this year in, I believe, February that my alliance is to the PGA Tour.

"Hopefully, [I will] return and defend my Race to Dubai title.

"There's a lot of other things that are on my mind and a lot of goals that I set at the beginning of the year that I look forward to."