Collin Morikawa announces ENGAGEMENT to Katherine Zhu: "My forever and ever"

The year just keeps on getting better for the 24-year-old phenom... 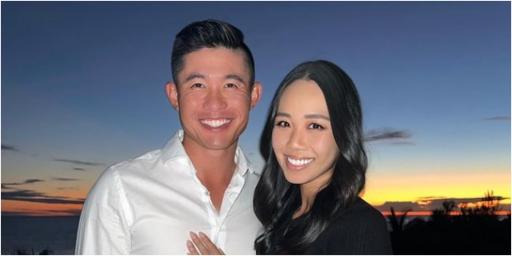 Collin Morikawa has not even pegged it up this week at the Hero World Challenge but he's already plus one. For life.

Morikawa, 24, shared an image of his bride to be on his social media channels with the message: "My forever and ever, I love you @katherinezhu."

Rickie Fowler, Tony Finau and Kevin Na were the first big names to send over their warm congratulations to the couple.

Morikawa met Zhu, also 24, at college where they reportedly hit it off instantly. She is a brilliant golfer and played for four years at Pepperdine with a reported scoring average of 76.54.

Zhu attended Zhuji Hailiang Private High School in China before she attended Pepperdine and met the champion golfer of the year and Ryder Cup winner. And DP World Tour Championship winner. And Race to Dubai... you get the picture.

Morikawa previously told the media: "We met in college and just clicked. It's crazy because I won my first college tournament that next week and we've done pretty good since - it's really fun."

He added: "I think she beats me on probably 70 per cent of our chipping competitions. It actually makes me a better player. What's great about her is that we're always competing.

"To have her around on off weeks when no one's around, she can always bring a wedge to the course and we can always do something fun."

The couple began dating in Apirl 2017. They shared their anniversary on their Instagram page last year.

Morikawa is one of the favourites at the Hero World Challenge this week, where Tiger Woods has made his first public appearance since his car crash in February.

Woods was also hitting golf balls on the range, too.