Bryson DeChambeau updated his profile picture and this is how his followers responded. 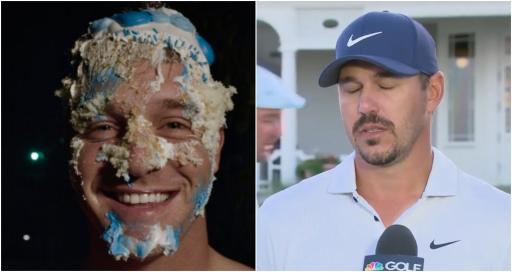 Bryson DeChambeau decided to update his profile photo on social media and it has left us a bit baffled.

Usually, there is a context given. But with DeChambeau, he has simply decided to upload a photograph with cake smothering his face.

Perhaps we will get an update in the near future with some more content from the DeChambeau camp, but for now we will scratch our heads.

DeChambeau, 28, has not played on the PGA Tour for quite some time after having injury troubles with his wrist and back.

It forced him out of trying to defend his title at the Arnold Palmer Invitational and ultimately stopped him competing at The Players.

We have no word yet from the DeChambeau camp about the potential return. But for now, we'll just wonder why he has done this.

DeChambeau's birthday is 16 September, so it's not his cake. Anyway, we'll leave you with how his followers reacted:

But what was the Cake Head Speed

Did the Saudi’s do this?

Is this when the Jay told you that you couldn’t have your cake and eat it too?

Dear Lord, thank you for being the person you are!