Tiger Woods reveals darkest moment to date: "It was a death sentence"

Tiger Woods has been speaking about career highs, career-threatening injury lows and his proudest golf achievement. 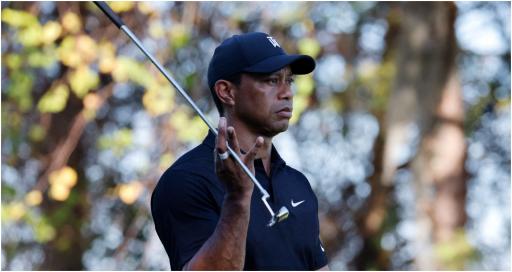 Tiger Woods has revealed at his lowest point he was resigned to just looking forward to walking again.

In an interview that was broadcast by Golf Channel on 13 March ahead of his induction into the hall of fame, the 46-year-old spoke on a number of topics.

Those being what he is most proud of in his career (his streak of 142 consecutive cuts made, not the major wins) and how he was always more scared of his mother than his father.

There was zero grey area with her, he said, and she was "just tough and solid".

Woods also spoke of how he sees the things that his father instilled in him with his own children Charlie and Sam.

The 15-time major champion would not be drawn in to commenting on his future. He has previously said he will play again.

At the moment, it is just limited golf activity - though watching his swing at the father/son jaunt at the PNC who really believes him?

But what was his lowest, darkest moment?

Woods said: "I was literally laying there for months. I just couldn't do anything. I couldn't walk. I couldn't get up.

"Yes, those were the darkest moments [because] my golfing career was done. I was just looking forward to walking again and hopefully I could live a normal life with my kids... participate in their sports and go to events.

"Not being able to participate in their lives drove me nuts, but, once we understood what the diagnosis... but also what the fix was going to be... it was also a death sentence.

"Because noone has ever come back from a fused lower back. Goose [Retief Goosen] was a sounding board [because] he had the L4 and L5 replaced, but at that time it was going to be a five to seven year window. And eventually you have it fused.

"But mine was so degraded and it was, 'okay you're going to have to fuse this thing but you are going to have a quality of life but there's a good chance you'll never be able to play on Tour again.

"You'll be able to play golf...weekend warrior with the buddies out there and have fun but not at the Tour level."

Woods was inducted into the World Golf Hall of Fame at PGA Tour headquarters last week.