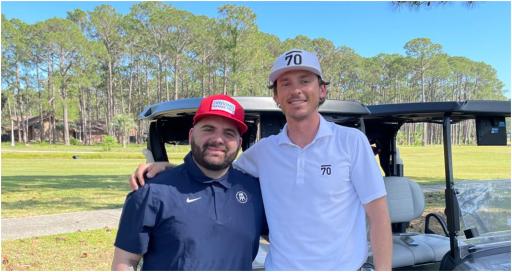 It wasn't long ago that former PGA Tour player Willy Wilcox was in the throes of drug addiction.

In an extraordinary interview with The Firepit Collective, Wilcox detailed just how bad his life had become.

He was the PGA Tour player with a drug addiction. He had struggled with substance abuse for more than 20 years.

It pushed him to the brink and it almost claimed his life. But two months ago he went into a treatment centre to begin the climb.

And it appears that he is doing well. He is resuming his golf career and beginning a new chapter in his life.

The pro has won more than $2.5million on the PGA Tour and has claimed victory on the now redundant Web.Com Tour.

And this week the tournament he played in - and won - was a million miles away from the riches of the PGA Tour.

Nice of ⁦@Jerrythekid21⁩ to bring the good vibes for the practice round this week. He is now locked in for all my p rounds ⁦@barstoolsports⁩ ⁦@BarstoolBigCat⁩ pic.twitter.com/ILcAjG7blZ

Yet it was the first time he had won clean. "Just holding a check again means the world to me," he told The Firepit Collective.

"And doing it sober means ever more." Wilcox was playing on the Emerald Coast Golf Tour.

There is no online scoring and the fields and purses are small. But that didn't really matter to Wilcox.

He won in incredible fashion, too. On the par-5 closing hole at the Holiday Golf Cclub in Panama City, Wilcox finished with an albatross.

The Firepit Collective say that Wilcox was 190 yards from the pin and under a tree. The weapon of choice was a 5-iron that was punched out.

It gave him a closing round of 64 to win by seven strokes. He finished on 17-under par after opening with a clean card of 67 and a 68 in between.

The 35-year-old said he had never made an albatross before and he knows that he has a long road ahead.

Still, everyone loves a good story of redemption.