Tiger Woods to poker icon about helicopters following his practice round at Southern Hills and his Masters performance. 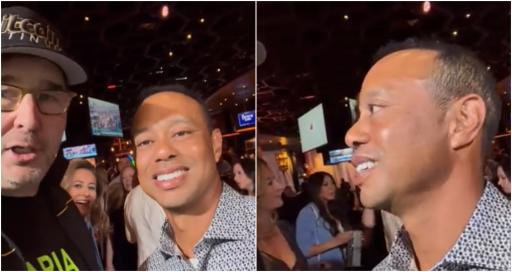 Tiger Woods mania appeared to be back in full swing this week after his private jet was tracked to Southern Hills ahead of another "game-time decision" over whether the big cat will play the PGA Championship.

Woods, 46, played 18 holes at the venue which will host the second major of the year in 2022 only weeks after returning to professional golf at the 86th Masters which gave us the most extraodinary scenes.

Thousands upon thousands of patrons followed Woods in his practice round at Augusta National following months (14 months to be precise) of speculation about if and when he would ever play golf again.

Woods did and shot an opening round of 1-under par but over the weekend as the temperatures dipped and the wind picked up it took its toll on his glued together body. Woods joked before the tournament that he was Humpty Dumpty. "Hopefully he's good enough," he said.

The 15-time major champion explained that his preparation just to get into the position to play 18 holes of competitive golf included "freezing himself to death" in an ice bath every night.

Well, it appears that the Masters wasn't a one-off and Woods is intent on playing as much professional golf as he can possibly can as the clock ticks down on his glittering, hall of fame career.

All being well, Woods will play the PGA Championship at Southern Hills. He won that tournament there 15 years ago so he knows the course fairly well.

Started off my MC job now at #TigerJamPokerNight by shredding @TigerWoods on the mic (16 @WSOP wins Beats 15 Golf Majors ) Tiger appreciates a good needle! I’m proud of Tiger: his @TGRFound has changed the world by changing hundreds of young peoples outcomes pic.twitter.com/GMi69g2VTP

After the practice round - where people hid in the bushes to film him - Woods took part in an exhibition clinic with Collin Morikawa.

And it appears that he bumped into the legendary and outspoken poker player Phil Hellmuth later in the week at a charity poker tournament for the TGR Foundation.

Hellmuth points out that helicopters were following Woods in his practice round. "They did, for six holes," Woods says.

Woods adds of his Masters performance: "I tried. I tried. Unfortunately I got a little tired. The leg kind of gave out a little bit. But I fought, and I fought all the way."

Hellmuth, who was on the mic at Woods' poker night, adds: "I'm gonna shred you on the mic night tonight, but not on this particular session."