Fred Couples needed Charlie Woods' permission to use his caddie

Fred Couples has revealed he needed to get Charlie Woods' permission to use his caddie on PGA Tour Champions. 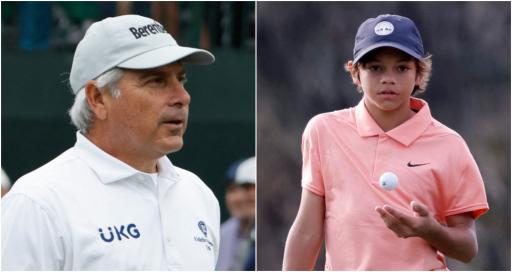 Fred Couples has joked he needed to get Charlie Woods' permission to use his caddie this week.

That caddie is Joseph LaCava, the son of Tiger Woods' looper Joe who has been with the big cat since his split with Steve Williams.

Joseph was on carrying duties for little Tiger at the PNC Championship last December when the duo combined well to finish second.

Couples is playing his second PGA Tour Champions event of the season at the Mitsubishi Electric Classic.

He was in the market for a caddie and his mind instantly went to Joseph.

Couples, 62, also worked with his father Joe for nearly two decades before they parted ways.

He said: "I didn't know Charlie's cell number, but I got in touch with Tiger.

"JT (Justin Thomas) was on the thread, and they didn't reply. Maybe they thought I was teasing a bit.

"But then I said, ‘Listen, Tiger, I need to make sure Charlie is OK with Joseph caddying for me in Atlanta.'

Joseph has recently graduated with a marketing degree and has already gained experience caddying during his weekends at Winged Foot.

He said: "I have a little bit of knowledge, but this is a new ballgame here, without using the rangefinder and stuff.

"[I am] learning the ropes a bit, but I talked to my dad and when I walked the course the other day, he gave me some good knowledge. He's been helping out when he can."

After round one together, Couples found himself at T-15 after shooting a 2-under par 70 at TPC Sugarloaf.

Ken Duke and David Toms were tied for the lead at 7-under par.

Check it out here.