Grayson Murray and Kevin Na almost came to blows at the Mexico Open after Na provoked and swore at Murray while on the driving range. 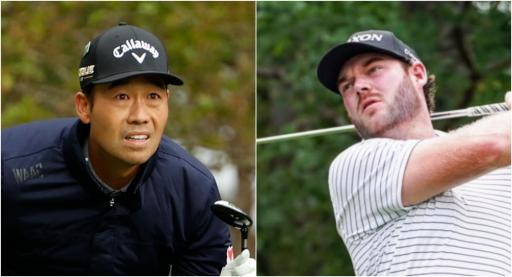 PGA Tour player Grayson Murray has revealed that he almost punched Kevin Na on the driving range at the Mexico Open after trading some verbals.

Speaking to the Stripe Show podcast, Murray revealed that he was practising on the driving range at Vidanta when Na shouted at him and there was "a lot of profanity" involved.

This conflict originated from a Twitter spat earlier in the season when Murray accused Na of slow play and Na came back with a comment about his poor form on tour.

In January, golf broadcaster Chantel McCabe tweeted: "Kevin Na walking in putts does not get old." Murray responded with this comment: "Kevin Na taking 3 minutes to putt them does get old."

Murray, who toiled with alcohol problems in 2021, has missed three out of four cuts on the PGA Tour this season. The five-time PGA Tour winner Na knew this and responded with: "U missing the cut is getting old." This is the source of tension between the pair.

Related: Rickie Fowler: "I definitely feel like I'm going in the right direction.

"I was hitting balls on the range, and just kind of had my head down walking to the chipping green. Sure enough, I hear someone yelling and cussing at me," said Murray about the confrontation in Mexico.

"I won't repeat every word he said, but basically there was a lot of profanity involved, and calling me a not-so-nice word about how I should have said it to his face in person. He didn't like that I didn't tag him on the post, which I'm pretty sure I did.

"I'm pretty sure Chantel (McCabe) had already tagged him, so if I respond he's already tagged in the post, so I think it works. I'm not afraid to go at him, I'll tag him.

"I guarantee every one of them could hear what he said, and the caddies. I went right up to his face and held my ground, and I told him, if I wasn't going to get suspended right now I'd drop his a** right there on the range.

"Because what he said was very immature and I know he wouldn't have said it to me if we were just seeing each other outside of the golf course.

"It was a very immature thing to say four months later, and to do it on the range, which he knows is his safe spot, he knows that I'm not going to do anything to him, he's just provoking me."

Luckily, no punches were thrown and no one was hurt, but it will be interesting to see what transpires during the week at the Mexico Open.

Next Page: Daniel Berger forced out of Mexico Open on the PGA Tour