Has Rory McIlroy just told us when Tiger Woods will be back on the PGA Tour?

Four-time major champion Rory McIlroy has hinted at when we could see Tiger Woods back on the PGA Tour, and it could be earlier than you think. 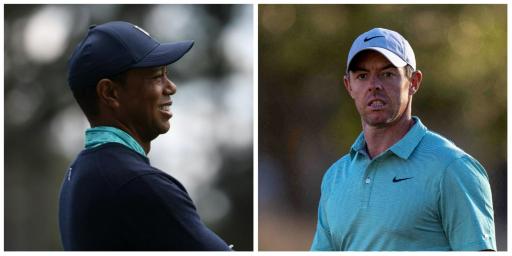 Four-time major champion Rory McIlroy has hinted that Tiger Woods could return at the Hero World Challenge on the PGA Tour, an event hosted by the man himself.

In an interview with golf&turismo, McIlroy revealed that Woods is still in rehabilitation from the severe injuries he sustained in a car crash in February 2021.

However, the small-field nature of the Hero World Challenge in the Bahamas could be the perfect chance for the 46-year-old to regain some confidence on the course. It is an unofficial PGA Tour event but offers Official World Golf Ranking points.

Related: Rory McIlroy urges PGA Tour and LIV Golf to "find a compromise for the sake of the sport"

The 15-time major champion was last seen saying his goodbyes to the crowd at St Andrews in July as he missed the cut at The 150th Open Championship. Before that, he withdrew from the US PGA Championship after visibly struggling with his right leg.

McIlroy also spoke about Woods' son Charlie who had his dad on the bag while playing in the Central Florida Regional event of the Notah Begay III Junior Golf National Championship in September.

"Tiger overall is fine, he is still working on his rehabilitation, the road is long but improving day by day. After the Open Championship, he had to take a break but I think he can return by the end of the year, maybe already at the Hero World Challenge.
"I have practised with him (Charlie) a couple of times and I can say that it is impressive to see him swing and think that he is only 13 years old. The important thing, however, is that he maintains light-heartedness and the right spirit."

Related Articles
Farmers Insurance Open: How much they are playing for
Mic'd up PGA Tour pro Max Homa cracks up CBS analyst with Patrick Reed joke
"He must continue to play for fun without being overwhelmed by the many pressures that, inevitably, will come as the son of a phenomenon like his father. But Tiger is very careful in this and is preserving it in the best way."

Woods and his son are likely to play in the PNC Championship after the Hero World Challenge which begins in the week starting November 28. The PNC starts on December 15 and it offers the chance for the duo to go one better than their runner-up finish last year.

However, Woods has been booked to play alongside McIlroy in an exciting fixture on December 10 when they take on Jordan Spieth and Justin Thomas in a 12-hole match at Pelican Golf Club Florida. It will be the seventh edition of The Match.

As for McIlroy, it is unclear when we will see him next on Tour as the calendar year draws to a close. The Houston Open and the RSM Classic are the two tournaments left between now and Woods' potential appearances.

The Northern Irishman is no doubt still reeling from his second consecutive win at the CJ Cup last month. This was his 23rd win on the PGA Tour.