Captain America is 25/1 to win at Tiger Woods' tournament this week... this is what happened in 2019. 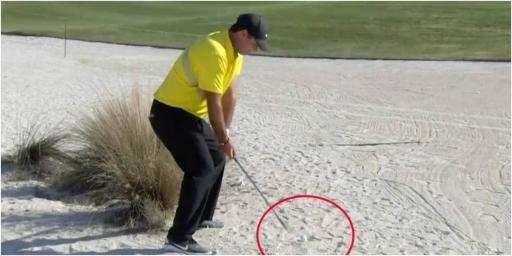 Rickie Fowler probably summed it up best at the 2019 Hero World Challenge when he said: "I don't know what there is to review".

He was talking, of course, about the now famous moment where Patrick Reed was accused of cheating by improving his lie in a waste area.

Reed feigned ignorance, complained of bad camera angles and suggested he was the victim of a witch hunt.

Several notable players have spoken about it. Brooks Koepka? He said he cheated.

Lehman: Phil Mickelson was gambling (in the woods) during Presidents Cup
K. H. Lee: What's in the bag of the two-time AT&T Byron Nelson winner?

Rory McIlroy later cut a more sympathetic tone, when he suggested that he'd rather give someone the benefit of the doubt.

"I think it's his...pre-shot routine nearly," McIlroy told the Golf News Channel in 2015 about Reed's apparent obliviousness to what he did.

"If it wasn't Patrick Reed and it was someone else I think it would have not been a bigger deal as it's been made out to be.

"I would never try to think that a competitor is trying to improve a lie."

McIlroy said perhaps he could give Reed the benefit of the doubt once or twice and move on.

"If he's learnt his lesson then I guess that's a good thing," he later added.

But what actually happened?

Reed was playing the 11th hole at Albany, which is a par-5.

It's a gettable hole if it is downwind, but Reed ended up missing way, way left off the tee and found himself in a sand waste area.

He had entered the day with a three-shot lead, therefore this was a crucial moment in the round as waste areas can have dreadful lies.

The first swing, the club came away low and appeared to scrape the sand behind the ball.

His second practice swing? A similar story, although it looked like it came away squarer to the target.

Fans bellowed: this is cut-and-dry. There was sand in the way. Reed had moved it.

Reed would go on to hack it out, missing the green and would make bogey.

Then PGA Tour rules official Slugger White decided to wait until after the round to decide what, if any, penalty to impose.

It was later a two-stroke penalty.

Paul Azinger commented on the broadcast: "If that's not improving your lie then I don't know what is."

What did Patrick Reed say about it?

Reed accepted the two-stroke penalty after viewing the video, but denied any wrong doing.

"After seeing the video, I accept that, but it wasn't because of any intent. I thought I was far enough away."

White said: "Patrick was assessed a two-stroke penalty for improving his intended line of play."

In the end, Reed finished third as Henrik Stenson claimed the title.

The fallout was pretty remarkable as the video did look damning. Moments of other controversy have surrounded Reed.

He's been critical of Ryder Cup captain Jim Furyk, got annoyed with noisy camera crews and liked Tweets which were disparaging about his snub by Steve Stricker for the Whistling Straits team.

There was also that moment at Torrey Pines when he was playing the Farmers Insurance Open when he benefited from a free drop.

He had already moved the ball believing that it was embedded in the turf.

But TV replays show the ball bouncing before it settled into the rough. Reed would go on to win the event.

"When all comes to push and shove, we felt like we did the right thing," Reed later said.

The 2019 moment resurfaced again recently when a Twitter account, widely presumed to be used by one of Reed's inner circle, replied to a post from Eddie Pepperrell suggesting the footage was digitally altered.