The 45-year-old was speaking to the media in Albany, where he is the tournament host of the Hero World Challenge. 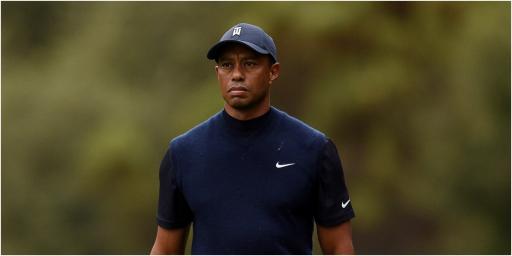 Tiger Woods refused to talk about details of his car crash in his first public press conference at the Hero World Challenge.

Woods addressed the world's media where he revealed just how difficult the last nine months have been, describing it as "long" and how there were some dark times.

Woods explained that he missed the "jabbing and the needling" of life on the PGA Tour as he described how this recovery has been on "another level".

"As far as playing at the Tour level I don't know when that will happen," Woods told the media in a blue and grey Nike shirt wearing a black cap.

In the press conference it was revealed:

Woods spoke of the first time he walked again, which was earlier than reports have suggested.

He also didn't know what level he would be able to come back at.

When asked by a Golf Digest reporter about what he remembered of the accident he refused to speak about it.

He simply said that all the details were "in the police report".

Woods however did explain what it was like getting to the point he was able to get outside.

What did Woods say?

"This one's (recovery) been much more difficult. The knee stuff, those operations were one thing then I had the back, that's another level and then with this right leg, it's hard to explain how difficult it has been.

"Just to be immobile for three months, just laying there. I was just looking forward to getting outside, that was a goal of mine. Especially for a person who has lived his entire life outside, that was the goal.

"I finally got to that point, transitioned from wheelchair to crutches to now nothing. It's been a lot of hard work, I've been very thankful for all the surgeons and especially the nurses who were the unsung heroes through all of it.

"They helped me get through it, I'm on the better side of it but I've still got a long way to go."

What did Woods say about playing again?

"I'll put it this way, as far as playing at the tour level, I don't know when that's going to happen.

"I'll play a round here and there, a little 'hit and giggle' I can do something like that. The USGA suggested we 'play forward', I really like that idea now! I don't like the tees at the back, I like playing forward, let's move it up, let's move it up!

"To see some of my shots fall out of the sky a lot shorter than they used to was eye-opening. At least I will be able to do it again, that's something that for a while I didn't look like I was going to.

"I'm able to participate in the sport of golf, but now to what level, I do not know that and I'll keep you abreast of all of that."

"Being wheelchaired outside to feel the sun, it was a milestone, he said."

This was Woods' first public media press conference since his car crash in February.

In an exclusive interview with Golf Digest that was broadcast last night, Woods outlined his future for the PGA Tour.

He painted a vision whereby he wants to pick and choose events to play over the course of the year, just like Ben Hogan did.

Woods revealed that when he came back in 2018 he felt like he climbed Mount Everest.

Hello folks and good morning from the Bahamas! Where Tiger Woods will address the people in a few minutes next to this motorcycle pic.twitter.com/b8rf7FBRty

But this time around, it is so much more different and he feels as though he won't be able to climb that mountain again.

"This time around I don't think I'll have the body to do that, but that's okay" he said.

It was a punch to the stomach, knowing that he thinks he'll never be able to reach the height of his powers again.

But the fact that Woods is able to feel as though he can play again at some point in the future is remarkable.

The fact it was 50/50 as to whether he would leave the hospital with his leg just shows how serious that crash was. He could have lost his life.