The Norwegian was travelling to the Hero World Challenge where Tiger Woods is the tournament host. 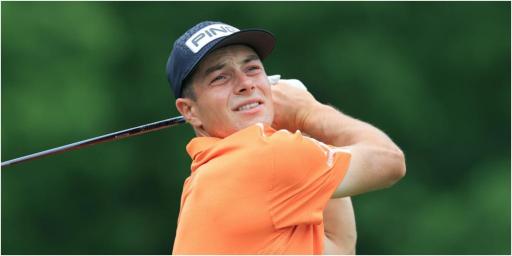 Viktor Hovland is one of the finest young golfers on the planet but it appears he is humble, too.

The 24-year-old has a bright future and already has a number of high profile wins behind him.

He has already won once in the fall swing of the PGA Tour, taking down the World Wide Technology Championship in Mayakoba, Mexico.

Hovland even managed to claim the win using someone else's driver after Danny Lee snapped his on the range after round two.

Of course, the attention is will probably be on Tiger Woods as the tournament host, who will provide an update on his future aspirations.

But it appears that Hovland is happy being the humble dude, without social media, just travelling around playing the game he loves.

Hovland was pictured at the airport on the way to the event by the golf content specialist Joy Chakravarty:

It’s incredible how down to earth Twitterless Victor is. Just saw him at Nassau airport. The girl behind hm asked what he did.

Hovland: ‘I live in Oklahoma and play a bit of golf’.

Why shouldn't be down to earth? He has just landed.

Seriously. Saw him play Friday in St Augustine, he just chilled and enjoyed himself with his buddies.

Met him at Karsten Creek two years ago. Stand up guy, chatted for a little bit about golf and PGA life. A fav of mine!

Hovland is 11/1 to take down the title in Albany.

There are no FedExCup points awarded at this event, but world rankings are affected.

Hovland has won three times on the PGA Tour and once on the European Tour.