The 15-time major champion told the world he is "at peace" with his future in golf, whatever that may be. 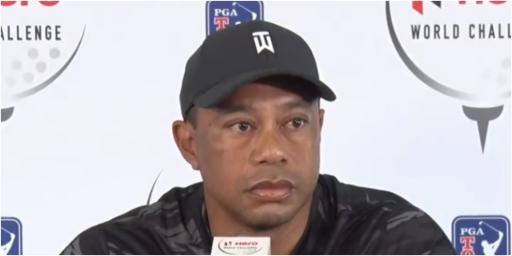 Tiger Woods refused to talk about details of his car crash today but he had a message to the media: "Stay away from my family."

In one of the most-anticipated press conferences of one of the greatest athletes of all time, Woods told the world he is "lucky to be alive".

"I'm grateful someone upstairs was taking care of me," Woods said of that day in February when he crashed his luxury SUV.

Throughout the 40-minute press conference, Woods detailed how difficult his comeback has been, describing it as on another level.

As you can imagine, there were questions about Woods' car crash and what he remembers about it, but the 15-time major champion shut it down immediately.

The answers are all in the police report, he said firmly, before adding: "This is a year I want to turn the page on".

Woods said: "I'm lucky to be alive but also to still have the limb. I'm very grateful someone upstairs was taking care of me."

He added: "People are gonna poke and go into my business. They can poke at me as much as they want, just stay away from my family".

Asked about a leg amputation, Woods confirmed that it was "on the table". When he managed to get home, he discussed his future in golf with his family.

"We had a talk," he said. "If this leg cooperates and it gets to the point where I can play, is it okay if I try - the answer was yes."

He continued: "To be able to get out there and hit putts with the old faithful, chipping and then hitting shots...I don't have the endurance, but to be able to do it is exciting."

What does the future hold for Woods? For now, he just wants to get his leg good and build up the endurance to play 18 holes again.

He's not even halfway towards his recovery point, he said.