James Hahn doubles down on his criticism of PGA Tour, has new axe to grind

PGA Tour pro James Hahn appears to have doubled down on his criticism of the 2023-2204 schedule and has a new axe to grind. 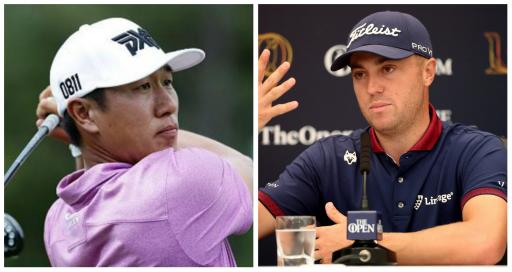 PGA Tour pro James Hahn turned heads earlier in the week when he started moaning about the newly-released schedule.

Despite the increases to prize purses, Hahn wasn't best pleased with the amount of travel involved in 2023-2024.

Chief of Hahn's complaints was the 20-hour travel days, not to mention those pesky expenses on top of that.

Okay, James, you may have to cover your own expenses, but at the end of your career there's that nice little pension to dip into.

Of course, PGA Tour players and their caddies do not have all of their expenses and hotels paid for. They have to front that themselves.

As he points out, the life of a professional golfer is essentially: "You catch what you kill..."

Though it has to be said, once you make it to the elite level of the PGA Tour, one might suggest you could have quite a nice life.

Hahn is no stranger to letting people know how he really feels. Earlier in the season, he called out a fan for chewing too loudly when he was putting.

This is what Hahn posted yesterday after the schedule was announced:

Take a look at the new PGA Tour schedule and you’ll understand why players are upset. Vegas to Japan to South Carolina to Bermuda to Mexico? For the viewers, it’s a flick of a remote. For us, it’s 20 hour travel days and tens of thousands of dollars in expenses.

We should be playing in major cities, places where they have an NFL football team. Not Bermuda and Puerto Rico. Us little guys have feelings too.

Was taught at an early age to always question the rule. Why are things the way they are and how would you make them better. This is how we grow, progress and create a new norm. There will always be people who don’t like change, but it’s all part of the challenges. They will be...

...the ones to challenge your thinking and either prove your point or make you change to make them stronger. It is all part of the exercise. No hard feelings y’all. Love the conversations. I got thick skin and can handle the heat. Till we meet again.

And this is his latest complaint:

Let’s address the elephant in the room. PGA Tour golfers have to pay their own expenses. Why? Had someone higher up tell me that that’s the beauty of our game. You eat what you kill. Then said we would be complacent if we had guaranteed pay and not work as hard.

I don’t mind admitting I’m wrong. If you guys think that’s the way it should be, so be it. Just want to have a simple discussion. Doesn’t mean I’m going to quit golf and flip burgers. Y’all are on one today.

A quick glance at his PGA Tour player profile shows that he's amassed $1.1million in earnings this year alone.

Over the course of his career, he's also pocketed $12million in winnings. Of course there are taxes and expenses...but still?!

In the comments section, Hahn has claimed that his annual outgoings are reportedly $200,000 give or take.

Still, as he points out, he loves the PGA Tour. And he's not quitting "to flip burgers".

You will not see him partying on a LIV Golf private jet anytime soon.