England's Tommy Fleetwood has opened up on his memories of beating Tiger Woods at the Ryder Cup and offered his latest thoughts on the LIV Golf Tour. 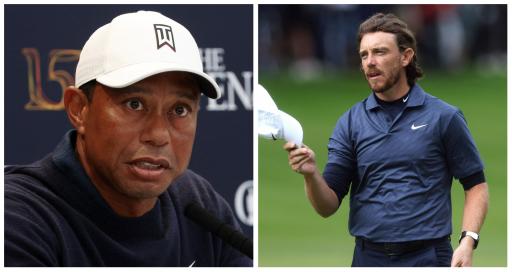 England's Tommy Fleetwood has opened up on his current thoughts about the LIV Golf Invitational Series and joked he will now tell stories about "s*** kicking" Tiger Woods and Patrick Reed in the Ryder Cup.

Fleetwood was linked with Greg Norman's mega money league ever since its inception. But then again, everyone has.

The Englishman, now 31, recently joined the Barstool Sports' Fore Play podcast where he opened up about his game, experiences in the Ryder Cup, how he sees the 2023 showdown in Italy panning out and of course his thoughts on the LIV Golf Tour.

You can listen to the full episode here.

Fleetwood recently had to take a break from the game due to a family bereavement. He returned to action at the BMW PGA Championship at Wentworth and also played in the Alfred Dunhill Links Championship on the DP World Tour, which was won by Ryan Fox.

When Fleetwood joined the podcast, he was asked about being one half of Europe's most successful partnership at a single Ryder Cup when he teamed up with Francesco Molinari to win four matches.

Barstools' Riggs asked what it was like "s*** kicking Tiger Woods".

Fleetwood told the podcast: "It was very enjoyable and I like the phrase. I'm going to keep that because people ask me about the Ryder Cup all the time and I was like, 'I played Tiger Woods three times and I beat him three times.' It might be the one record I have against him, you know, forever.

He continued: "That week for me I would say - as a rookie - I was unbelievably lucky in some of the things that went for me. We were playing on a course that I had won on the year before. Fran [Francesco Molinari] was my partner all the way through the week, you know, my closest person out on Tour.

"I was very, very comfortable with him. It was at home, I think that makes a difference. There was a tonne of things really. It was my son's first birthday ... there was a lot of things going for me.

"And to be fair, people forget, Patrick Reed chipped in in the first game that we played. They were 2UP through 10. We were doing nothing, I was putting horrendous, I wasn't really playing very well. And then, you know, a few holes later we got through the first match and we never looked back."

Asked what his experience has been like after the emergence of LIV Golf, Fleetwood said: "Probably more draining for more people other than me. I think, on a personal level, I've been happy to start getting my game back where I think it should be and start competing in events again. I was having a really good summer.

"I think ... it's funny really because I think people are bored of it [LIV]. But then, also, people can't help but talk about it and can't get enough of it. It's been a massive thing. You sort of, you flip between going 'Is it really that big a deal where a golfer decides [to play] his golf?'

"And then, you think 'It is what we live in and it's an amazing talking point and it's big news and there's a load of crap going on around it.'"

He continued: "I think the strangest thing has been - there's a few tournaments this year that have felt a bit strange and had like... a little bit of a weird atmosphere, and definitely more recently I think.

"It's just ... you get on with what you're doing. I just wanna play as well as I can play. I totally get it, I've always had the feeling or the idea that as long as I'm playing my golf where I wanna play it I'm perfectly happy. I'm not really that bothered what other people are doing.

"I get to play the events I want to play. I'm playing in the majors. I'm playing in big events. Everything's great for me. But then I think there's certain things that players have done that [they] shouldn't have done ... [like] making a choice and then suing people. [I don't think] that's something they should be doing.

Related: Does Branden Grace have a pang of LIV regret? Yes...

"Overall, there has been some strange events and it's going to be a talking point for a long time yet and it's not going anywhere."

Fleetwood was prompted by Barstool's Dan Rapaport that it seemed as if he was able to compartmentalise his feelings fairly well.

"Well yeah," Fleetwood told the podcast. "Because like I say, I think some people that have gone it probably was a good idea to go. They are the ones that might not be as competitive going forward or are a bit older and they've been offered what they have or the chance to do what they're doing.

"I'm not that bothered. That's fine. I just think when you make a choice and you start suing I think it's a bit silly really. But equally, I'll still talk to any of the guy's really. I've no real remorse. I've got no time for that. I'm very fine. I'd much rather everyone get on and be happy.

"But it's not the way things are going at the moment."