Webb Simpson has discussed how he got injured, how he feels heading into the Masters and how he's watched this Tiger Woods win "50 times". 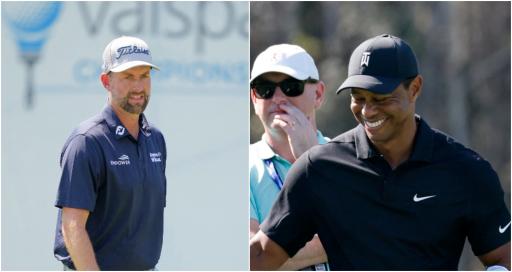 PGA Tour pro Webb Simpson has revealed a pursuit of power led to his injury woes as he looks forward to The Masters.

Simpson has returned to the PGA Tour after suffering an acute herniation the week before the WM Phoenix Open.

The 36-year-old revealed that his surgeon believed his disc degenerated over time from playing golf. But Simpson believes there was something else to it.

Simspon told the media that around three years ago he started trying to hit the ball farther. From watching old swing videos, he sees the difference.

He explained: "The surgeon thinks my disc degenerated over time, just from golf, and I think three years ago is when I started trying to hit it further, and I got a lot more side bend this way, and my neck had more tilt.

"So I think that over time, trying to hit it as hard as I can, just made it a lot worse.

"The surgeon told me eight weeks off, which brought me back to Augusta. But the more they had a bigger picture of kind of, I have a trainer full-time that I can see all the time, they knew I could devote all my time to getting it ready.

"That's when they said The Players [was] a possibility. And I played last week with no pain, full range of motion. So I was really thankful."

A pair of 67s saw Simpson T7 going into the weekend at the Valspar Championship as the PGA Tour's Florida swing concluded.

He has finished in the top-10 here on three occasions in 11 starts. A win would deliver him his eighth PGA Tour victory.

But his attention, like many, now turns to Augusta National for the 86th Masters.

Does Simpson have any advice for the first timers?

Simpson said: "I think for the young guys I think they can maybe listen to too much advice and then they're hearing from so many different players or caddies or people their opinion and they might get locked up.

"They might -- sometimes it's good to not know where all the trouble is. But I think there have been some young guys that have success early on there, not many.

"I just think experience for me, I know on Tuesday, Wednesday, if the greens are slow, I know by Thursday they could be completely different. So I think just knowing that and knowing other things like that help me or help a veteran player there, just kind of take a deep breath and kind of know that Augusta can change in an instant.

"And also I think for the young guys it's, it can be overwhelming. I mean it's a, beside the Ryder Cup, it's probably the most pressure-filled tournament we have in a good way, I think that's what make it's so exciting. So, yeah, I can't wait to get back."

Where was Simpson watching it?

"I was at my house watching with my parents. I had actually gone [to Augusta], that was my first year of going to the Masters on a Monday practice round. I never saw Tiger.

"And at the time even though I was obsessed with golf already I didn't know the magnitude of what it meant.

"It was just a young great player who happened to win the Masters, I didn't realize that he won by 12, right?

"I didn't realize what that meant, the record and obviously knew how good he was, but it hadn't really sunk in yet I guess at the time."

Does Simpson understand the magnitude of it now?

He said: "Absolutely. Yeah, I mean, I watched that '97 Masters on YouTube probably 50 times. I love that Masters.

"That just -- I mean the narrator's voice, seeing Earl and him hug after he won, there's just so much there that it brings back great memories."