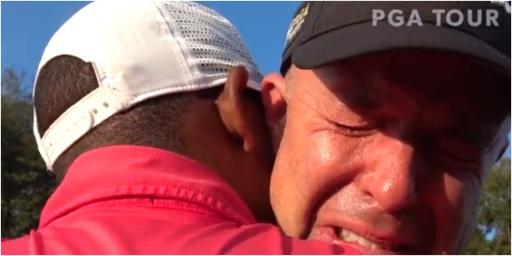 When it comes to feel-good stories this one is definitely up there.

A three-decade club pro made a lifelong dream come true when he dominated his first senior Q School at TPC Tampa Bay.

Rob Labritz broke down in tears at the 18th green after he got the job done, phoning his wife and telling her: "We did it."

Labritz told how he had dreamed about making that phone call for many years and now he has the chance to play a full season on the PGA Tour Champions.

He is now fully exempt for the 2022 PGA Tour Champions season.

Rob Labritz did it and all the emotions poured out as the three-decade club pro secured his card for 2022. pic.twitter.com/N5IxHM08Zq

He closed out the week with a bogey-free 8-under 64 to reach a 17-under par total, and joins four other players who are fully exempt for the 2022 season.

Now 50 years old, Labritz is seen as a highly respected club professional. He is the director of golf at GlenArbor Golf Club in New York.

He has made eight appearances at the PGA Championship and was even the low club professional at Whistling Straits and Bethpage Black.

"This is what I've worked for my entire life. Every time I’m out hitting golf balls, I’m thinking of this. I'm thinking of the shots I need to hit to make sure this happens. It’s super important, but it's super fun, too. I’m doing what I love, and there's nothing better."