Rory McIlroy throwback: The time he was a test subject on a NERVY trick shot

Louis Oosthuizen shared the video of a young Rors on his Twitter profile... 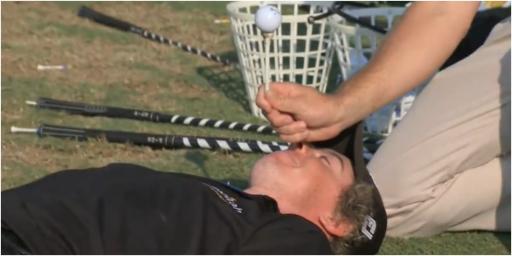 Louis Oosthuizen took us on a trip down memory lane by sharing a video of Rory McIlroy as a test subject on a cool trick shot.

McIlroy lies on the floor nervously with a tee peg in his mouth being held by the South African Open champion.

"Keep your head still Rory," he is told before the player smashes it off the tee inches from his mouth as Oosthuizen smiles and the crowd laughs.

McIlroy asks: "Where did you hit that?" The answer was: "Straight out of the middle."

I’m just putting this here for everyone to give proper accolades to @McIlroyRory and I for being test trick shot subjects before they were a thing. #WorldTrickShotDay pic.twitter.com/1onKuxGMTk

The Northern Irishman, who has won 20 times on the PGA Tour and is a four-time major champion, is sporting a remarkably different haircut.

The video was posted by Oosthuizen for world trick shot day.

Fans posted their opinion Rors' hair, suggesting that his barnet is absolutely fantastic. "Trick shot is okay, Rory's hair is the best,' one said.

"Trendsetter" another posted. Another said: "Very good I wasn't holding that driver, it would have been the end of his career."

McIlroy, 32, made headlines recently by defending his fellow players' rights to play in the controversial Saudi International.

Ah, they were the days - Rory's Inbetweeners days. pic.twitter.com/ZbIpiLtQ15

"I do see reasons why they wouldn't grant releases but I think if they're trying to do what's best for their members and their members are going to a place other than the PGA Tour and being able to earn that money, I mean, we're independent contractors and I feel like we should be able to do that if that's what our personal choice is. My personal choice is not to do that but obviously a lot of players are doing that and I think it’s fair to let them do that.

"My view as a professional golfer is I'm an independent contractor, I should be able to go play where I want if I have the credentials and I have the eligibility to do so. I'd say most of the players on tour would be in a similar opinion to me."

PGA tour
dp world tour
Rory McIlroy
Louis Oosthuizen
The Open
masters
Previous
Lee Westwood on Downing Street Christmas party: "The RATS are on the ship"
Next
Qualification for The Masters 2022: Ian Poulter has work to do to reach Augusta