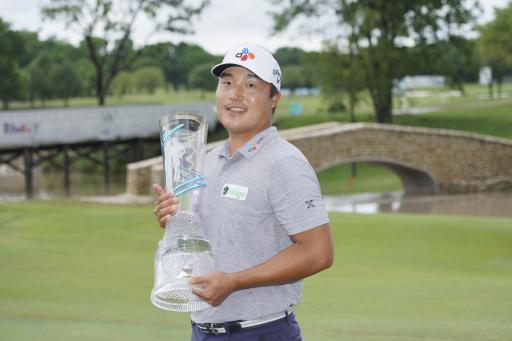 Kyoung-Hoon Lee survived a water-logged and delayed final round at TPC Craig Ranch to secure his first win on the PGA Tour at the AT&T Byron Nelson.

Lee began one shot behind the in-form Sam Burns on 19-under-par in the final round, in which the tee times were brought forward in an effort to avoid the predicted inclement weather.

The South Korean took control from the very start by making a birdie on three of his opening four holes to move to 22-under-par for the tournament, three ahead of the in-form Burns.

Burns' slow start may have cost him on the day as the World No. 44 made two bogeys in his first four holes to fall back to 19-under-par at an early stage.

Lee, despite making a bogey on the 9th hole after a poor drive, made the turn at 23-under-par and was on course to secure his first professional win since 2016.

The rain began to pour down in Texas, but this didn't stop Patton Kizzire from firing a round of 9-under-par to post the clubhouse lead on 21-under-par. He would end up joining Daniel Berger, Charl Schwartzel and Scott Stallings in a tie for third.

Lee birdied the par-5 12th hole to maintain his advantage of three shots on 24-under-par but unfortunately, the rain caused too much casual water and play was suspended for over two hours while the final group were on the 16th green.

"It's been a long time for me and the conditions were very hard for everybody today, but I tried patiently and kept playing positively," said Lee, who has now qualified for next week's PGA Championship.

"I have waited a long time for the win so I am very happy, very excited and very thankful for everybody. I still can't believe it but this time, I had more belief and my mind was stronger so it was perfect for me. I can't believe it I am so excited."

Although Burns couldn't win his second consecutive PGA Tour title, the 24-year-old also birdied the final hole to finish in outright second on 22-under-par, three shots behind the winner.

Lee became the third South Korean to win the AT&T Byron Nelson in the last eight years, after Bae Sang-Moon won in 2013 and Kang Sung-Hoon won in 2019.

NEXT PAGE: HAVE YOU EVER BEEN AS UNLUCKY AS ROBERT MACINTYRE WAS YESTERDAY?