Bryson DeChambeau has provided an update on his return from injury following surgery earlier in the month. 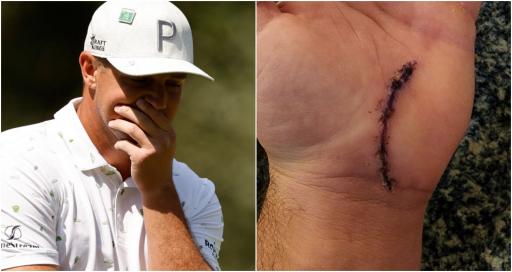 Bryson DeChambeau has shared image of his injured left hand after his cast was removed following surgery.

DeChambeau, 28, underwent surgery after the Masters to repair a hairline fracture in the hamate bone.

The eight-time PGA Tour winner and 2020 U.S. Open champion slipped and fell over playing ping pong at the Saudi International in February.

He had attempted to play through the injury, along with an issue in his hip, but it proved too much and surgery was the only option.

"Healing up! Gripped a club today. Can't hold on to it for long, but getting there!" he wrote on Twitter.

DeChambeau went under the knife on 14 April and now faces a bit of a race against time to play the PGA Championship.

Tiger Woods and Phil Mickelson have filed registrations for the event, too, but it remains to be seen whether they are competing.

Healing up! Gripped a club today. Can’t hold on to it for long, but getting there! pic.twitter.com/oS06NTjGxw

Today, I underwent successful left wrist surgery on my fractured hook of the hamate. The surgery was performed by world renowned Hand Surgeon Dr. Thomas Graham. I want to thank Dr. Graham and the incredible staff and The Kettering Medical Center in Ohio. pic.twitter.com/SoS9HVh7Wo

Despite surgery, DeChambeau hasn't remain totally inactive. He was back in the gym shortly after his surgery doing lower body work.

He also was filmed by an NFL player ripping a drive one-handed.

DeChambeau is ranked 18th in the OWGR and he has only played six times this year.

He opened the year with a 25th-place tie at the Sentry Tournament of Champions in Hawaii.

Then he missed the cut at the Farmers Insurance Open which included an hilarious exchange with a rules official trying to get them to move.

He later withdrew from the Saudi International after 18 holes having shot a 4-over par round at Royal Greens in Jeddah.

His last two starts are both missed cuts at the Valero Texas Open and the Masters.

DeChambeau opened up on some of his struggles in his latest YouTube video that went behind the scenes in Texas.