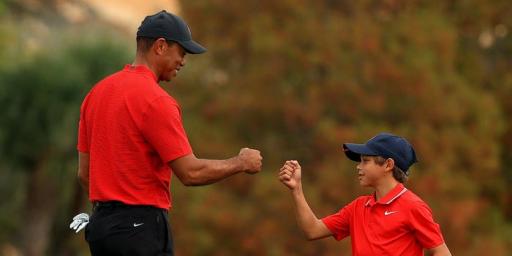 Charlie Woods carded an opening round of 1-over par 72 at the Notah Begay III Junior Golf Championship with dad Tiger Woods enthusiastically taking to his caddying duties.

Do we think that Tiger pushed for a 72-hole format considering it's typically a format observed by that tour?

Related: Golf ball Tiger used in 1996 ace up for auction!

Tiger is on the move at the NB3 Jr https://t.co/pairJBBk4A pic.twitter.com/UwoFfLrtOQ

Charlie is now 13 years old and he's looking more and more like his dad over a golf ball every single time we see him tee it up.

The tournament is actually being filmed and so we'll soon be able to get a closer look at all of Charlie's mannerisms that we are oh so familiar with.

Footage from the event will be broadcast on the Golf Channel in December.

Charlie sits in T-21 position after the first round, which was five strokes off the lead.

Tiger's son started with a bogey but bounced back immediately with a birdie. He dropped a shot at No. 4 but was able to get that stroke back at No. 6.

On the back nine he made birdies at No. 13, 15 and 16, dropping shots at the par-4 14th and unfortunately finishing with a triple bogey at the par-5 closing hole.

Fans have been pointing out that Tiger was still heavily limping. He "didn't look right" the last time he looped for Charlie.

He used a golf cart, which is something even PGA Tour superstar Will Zalatoris wants him to do going forward.

It was also similarly amusing to see Woods going all-in by wearing a bib.

Golf fans also pointed out that Charlie has also decided to wear FootJoy golf shoes. Tiger rocked up at the 86th Masters last April and turned heads when the swoosh wasn't visible on his feet.

Tiger said there was "nothing" in that and he was working with Nike to develop a more comfortable shoe to provide more stability with his heavily damaged right leg that was crushed in his car crash.

The 15-time major champion has not said when he will return to professional golf but he has been confirmed as a participant in the latest edition of The Match.

The Match: Everything you need to know

Tiger will team up with Rory McIlroy to face off against Justin Thomas and Jordan Spieth at Florida's Pelican Golf Club on 10 December.

It could be conceivable that Tiger will play three times in December. After appearing in The Match, he could be playing the Hero World Challenge on the PGA Tour before taking part in the father/son jaunt at the PNC Championship with Charlie over 15-18 December.

Judging by Charlie's swing they could go one better than last year and win the tournament.