PGA Tour professional Mark Hubbard knew he was going to miss the weekend so tried the no-look putt! 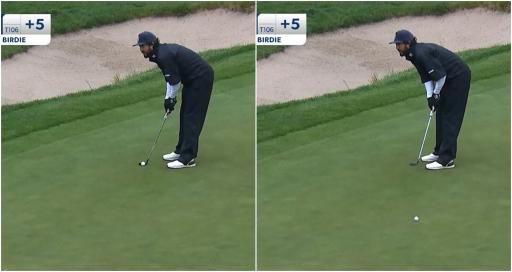 When you see PGA Tour players grinding to make the putt you can see how important it is.

Earlier in the season at Riviera Country Club the former World No.1 Jon Rahm was poised over a six-footer to make the weekend.

He was 15 strokes off the lead and dare we suggest didn't actually need the money had he made the weekend.

Yet he studied that thing from all angles and drained it at Tiger Woods' Genesis Invitational.

However, when you know you are going to miss the cut then it's a completely different story. At least for Mark Hubbard.

Hubbard, during Friday's second round at TPC Potmac at Avenel Farm, was at one point poised to make the weekend at 1-over par after 15 holes.

Yet a horrid bogey and double bogey put paid to any chance of the 32-year-old getting to stick around for the weekend.

Thanks for the no tag, just lost me the #pip

By the time he had reached his final hole he had a meaningless 16-foot putt for birdie and decided to do a Shooter McGavin from Happy Gilmore.

We presume he is looking at his playing partners and caddie as he makes the stroke and almost holes it but that putt was just a tad low.

The PGA Tour posted the moment of pure hilarity and Hubbard thinks they have done him over.

"Thanks for the no tag, just lost me the #pip", he replied.

It's true, he does have a point. The least they could have done was not cropping the footage so you can see his name and tag his account!

Still, we could all take a leaf out of Hubbard's book. If you're going down, the least you can do is go out with a smile in a blaze of glory.