PGA Tour pro Matt Jones wasted no time over the ball at the Sentry Tournament of Champions and also left Kapalua with a scoring record. 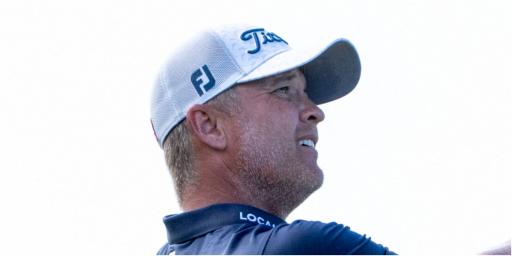 PGA Tour pro Matt Jones drew plaudits for his quick play at the weekend and also made history in Maui.

At the Sentry Tournament of Champions, Aussie Jones got the 36-hole scoring record for his weekend exploits.

The 41-year-old followed up a Saturday 11-under 62 at the Plantation Course with a 12-under par 61 as he gave chase on Suday.

That combined score of 23-under par he accumulated over the weekend saw him place third behind Jon Rahm and champion Cam Smith.

It was the lowest 36-hole score in relation to par in PGA Tour history, beating Steve Stricker's 21-under he made at the '09 Bob Hope Classic.

Jones' 72-hole total also toppled Ernie Els' record of 31-under, which the South African set at Kapalua in 2003.

But Rahm and Smith also beat Els' record in a week of simply bananas scoring.

Jones told the media of the scoring:

"I mean, it just goes to show the depth of the PGA Tour and how good the players are.

"If you told me I would have shot 32-under I would have been more than happy to sit in the clubhouse and let everyone play and see what happens."

Jones, who holed out from 85-yards for eagle at the 13th and also drained a monstrous 52-footer at 17, also drew plaudits for his pace-of-play.

Those plaudits were because of his pace of play.

Off the tee, Jones took little time in picking his target before swinging.

Skratch golf decided to time one off his swings off the tee and it measured just over four seconds.

Even without their precious green-reading books sometimes the players this week were a little bit slow.

We could all be a bit more like Jones.

"You just have a lot of opportunities out there and I was lucky enough to make some putts today and yesterday and then holed out a few shots.

"Great start to this year. Hopefully something I can build on for the rest of the year."