Max Homa questioned whether Corey Pavin knows something he is not telling him after watching an old clip of a famous Honda Classic moment. 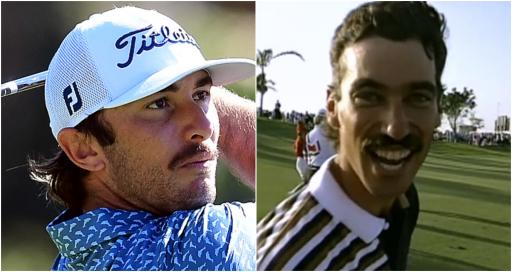 The PGA Tour is hosting the Honda Classic this week as part of their Florida swing.

As such, it's quite a good time to share some footage of some epic shots and moments at PGA National over the years.

Famed for its three-hole stretch named The Bear Trap, it has always lived up for its reputation for carnage.

Corey Pavin, the former Ryder Cup captain and 1995 U.S. Open winner, won the Honda Classic in 1992. And in remarkable fashion.

Pavin holed out from the fairway to force a playoff on the 72nd hole, then went on to win. It was one of 15 PGA Tour victories.

An incredible way to win a PGA Tour event. But one eagle-eyed tour pro saw the funny side of the resemblance they share.

So step up, Max Homa. The 31-year-old three-time PGA Tour winner certainly enjoyed the similarities they share. Dad? He asked.

Finish for the ages.

Corey Pavin holed his approach on the 72nd hole at @TheHondaClassic to win in 1992. pic.twitter.com/wtJGLTMxDP

Related: Max Homa gets chills from this moment

It didn't end there. Pavin replied with a, "Yes son?" Homa is famed for his social media jokes but perhaps this one is right up there.

Over the last few years, Homa has been roasting peoples' swings that they send in to him with some hilarious takedowns.

Let's hope he can pick up that again in the future. In the mean time, we await the results of the paternity test. Eagerly.