Players 2022: Jon Rahm asks "Why is everybody panicking?!"

Jon Rahm spoke to the media after his opening round at The Players Championship at TPC Sawgrass. 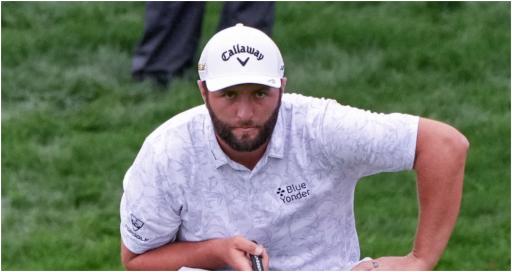 World No. 1 Jon Rahm asked "why is everybody panicking" after one poor month in form.

Rahm posted a 3-under opening round of 69 at The Players Championship at TPC Sawgrass and confessed he had changed one piece of equipment.

He decided to switch up his putters and put his old one back into play after a frustrating performance at Bay Hill at the Arnold Palmer Invitational.

If results don't go his way this weekend, then Rahm could potentially be toppled at the top of the world rankings. He hasn't moved off the top spot since last year's Open.

"It just needed a timeout last week," Rahm said of the putter. "That's it. Luckily we had -- I'm going to start calling them browns because they weren't even greens.

"They were browns last week, and that was enough to not want to use it again."

Rahm made five birdies and two bogeys as Tommy Fleetwood and recent first time PGA Tour winner Tom Hoge shared the lead after round one.

The Spaniard gained 2.4 strokes on the field on the greens during round one and found 77.7 per cent of them in regulation.

What was a bit strange in that first round was that his iron game was a little bit off whereas in the last few weeks he was losing strokes on the putting green.

Rahm said: "I had one bad month. Why is everybody panicking? I'm also first in greens in regulation and second off the tee, so when I'm on the green that often if I'm not making a lot of putts, it's going to show that it's not that good.

"When I'm only missing two greens a round, if I miss one up-and-down, it shows that it's bad. It's not really bad.

"I've been working on some things, and sometimes, like I said in the press conference, I see improvements, the numbers might not say there's improvement, but I see it. It's kind of what happened.

"Today was a bit the opposite. Today I could tell my iron game wasn't quite there, and when the short game needed to be there, it was."

So what exactly has Rahm been working on with his putting?

He explained: "It's been more short game than putting. I think I said it in the press conference, too, I haven't been hitting bad putts.

"It's been a month of seeing putts go by the edge of the hole that were good, and that's what it was. Sometimes -- I'm usually the last person to ever blame the putter. But I felt like I needed to because that was kind of out of sorts.

"Almost kind of got me out of being too technical and more into putting as an art."

But did going back to the old putter simplify things?

Rahm replied: "Like I said, it just needed to be in timeout. That's it."

Rahm's results this season on the PGA Tour