Tommy Fleetwood on what Collin Morikawa said to him: "That was harsh"

Tommy Fleetwood revealed his motivation for shaving his beard and the harsh comments Viktor and Collin made about him. 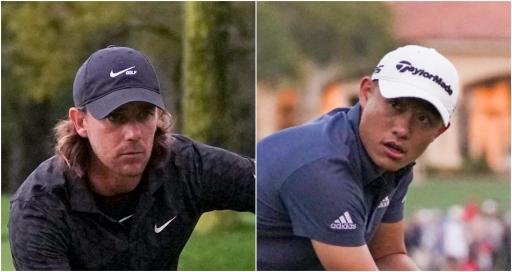 Early Players Championship leader Tommy Fleetwood has revealed a bad mood led to him shaving off his beard.

Fleetwood shared the lead with Tom Hoge at TPC Sawgrass with a fine opening, weather delayed 6-under round.

His fantastic early start could prove important over the weekend as dreadful forecasts means the tournament could bleed into Monday.

Fleetwood was very close to not making it into the top 50 players in the world and missing out on The Players. In fact, he made it on the number.

It's been a tough few years for Fleetwood. Covid-19 has obviously had an impact on everyone and he - in his words - has gradually declined.

What is the reason for that? "I think there's been a certain [few] things in my swing, if you like, that I haven't quite understood."

He added: "I haven't sort of played terrible. My results haven't been terrible, but I've lacked obviously very good results.

"And then I think especially from a world ranking standpoint, that makes it very, very difficult. So I've just sort of been gradually declining.

"So, yeah, it's been difficult. I just haven't played like I can or how I expect to play. But you know, things change. Let's see."

He said: "I love this golf course. I really, really do. If you play well, you get rewarded, and if you play poorly, you're going to struggle to make a score. I think it's major-like in that sense."

So why did he shave off the beard?

"I was in a really bad mood. It was like break some golf clubs or shave my beard, then I went for the beard," he joked.

Was that a joke, or semi-serious?

"It's kind of semi-serious," Fleetwood said.

"It was partly true, partly I just -- it was kind of in a mess, and I was going to shave it.

"Then I was sort of in a bad enough mood where I couldn't be bothered putting the clipper on, like on number nine, so I just took it. It will grow back."

What does his wife Clare make of it?

"She definitely has a preference, and it's not this one. Definitely my favorite comment, it was my 31st birthday in Abu Dhabi this year, and I was playing with Viktor Hovland, and obviously we're very close, and he was like -- in fact, I was playing with him and Collin, and both of them were looking at me like, we had to Google your age. I thought you were 37, 38. That's a pretty harsh comment, to be fair.

"When I shaved it off, I think it took about 15 years off me. Everyone kind of noticed that I look a lot younger without the beard. That's a positive. Clare definitely prefers me with a beard, so I'll definitely grow it back.

"As long as I can keep my temper and keep smiling, then I won't have to shave it off again."