This was certainly not the footage you'd expect to see at the Travelers Championship on the PGA Tour and it was a miracle that no one was hurt... 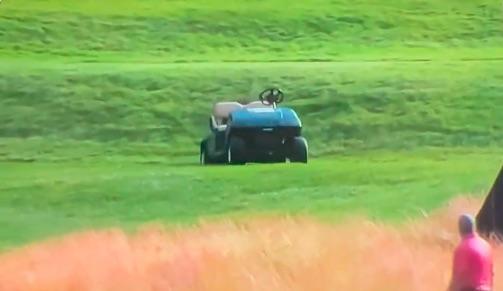 So far this week, we have seen some fantastic golf at the Travelers Championship on the PGA Tour. Rory McIlroy put on a clinic on day one to share the lead with J.T. Poston overnight on 8-under-par.

However, it hasn't just been the golf that has caused all the excitement at TPC River Highlands. We found some incredible footage of a runaway golf cart in Connecticut.

Courtesy of the West Texas Driving Range Pro on Twitter, we found a video of a golf cart skating down the slopes of this week's venue in an uncontrollable fashion.

The hills looked very steep and there was no one in the buggy. At first, the man in the pink shirt was going to attempt to stop the vehicle in its tracks.

Related: Rory McIlroy to Sergio Garcia on LIV Golf riches: "We don't deserve to be paid"

What further proof do we need that ghosts are real? #golf pic.twitter.com/tYo26nHBga

But luckily, he saw his senses. As soon as he got close to the loose cart, he decided not to engage. The cart kept steaming forward and crashed into a lake.

Good luck to the poor people who have to fish out a large golf cart from this lake. The staff at the Travelers Championship certainly have an unexpected challenge on their hands.

Luckily, no one appeared to be hit by the vehicle from the beginning of the footage until the end. This is something you rarely see at a professional golf tournament.

PGA Tour player Scott Stallings revealed in the comments on the tweet above that he saw the cart hurtling down the hill as he was on a nearby green.

The footage doesn't show any other part of the golf course, but Stallings must've been as flabbergasted as every other spectator to see such a mad sight.