These stats show just how incredible Justin Thomas has been with an iron in his hand on the PGA Tour this season. 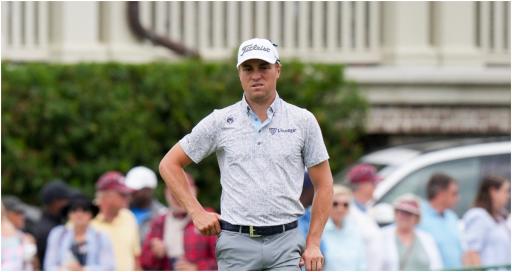 Justin Thomas is a player on the PGA Tour who typically is unflinching in assessing his own play.

Every single season, he sits down and writes out his lofty goals and then shares how he has fared when he has played his last tournament. Then he does it all again.

When he won the PGA Championship in 2017, golf writers, fans and analysts all thought he would go on to win majors with alarming regularity.

But it hasn't happened. The one-time major winner has a major problem and he knows it. He has said in public what he perhaps would be forgiven for saying in private.

He knows he has under-achieved when it comes to the big ones.

"I know I have," he said during a press conference at Augusta National ahead of The Masters when asked if he's underachieved in the majors.

"I have not even close to performed well in my entire career in majors."

It sounds brutal, but since that win five years ago he has only had one realistic chance to win a major.

That came during the 2020 Masters when he finished fourth. And still, he was still eight strokes off the winning pace.

Thomas also added: "I just need to get a little bit better at kind of getting in my own world and just going to play golf."

Getting in his own world seems an easy thing for Thomas to do on the PGA Tour.

These stats prove just how good Thomas has been on the PGA Tour this season with an iron in his hand:

Justin Thomas Approach Proximity ranks inside 200 yards on the PGA Tour this season:

When the PGA Championship begins in a few weeks' time at Southern Hills Country Club, it seems crazy to think that in reality Thomas won't be a big, big favourite.

Jon Rahm, Scottie Scheffler and Rory McIlroy are all favoured ahead of Thomas for the second major of the year.

Collin Morikawa can be found at the same price as Thomas win the PGA.

Thomas, now 29 years old, although he has five other top-10 finishes in the majors, has never threatened to win another one.

When he heads to Oklahoma, he'll need to get back in his own little world.

Do you agree? Will Thomas lift another major this year?