The PGA Tour have reportedly denied requests by their members to participate in the first LIV Golf Invitational Series event in England. 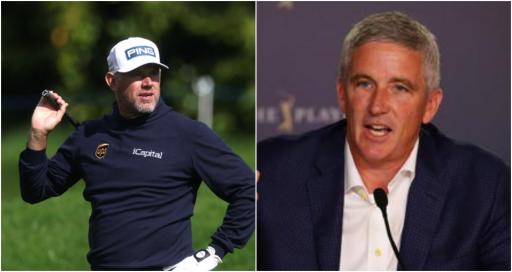 The PGA Tour has denied its members permission to play in the first Saudi Arabia-funded golf tournament at Centurion Club next month, Golfweek have reported.

In a report written by Eamon Lynch, the publication claim that the PGA Tour have sent denials to the players who had sent in their requests on Tuesday.

Waivers were expected to be granted for the London event and it was anticipated the denials would have been issued for the second tournament of the LIV Golf Invitational Series.

That is because the second tournament of the eight-event, $255million series is being held in the United States and conflicts with the PGA Tour bylaws.

All members of the DP World Tour, formerly the European Tour, and the PGA Tour have to request waivers to compete in conflicting tournaments. The deadlines on both circuits vary.

Golfweek reported that a PGA Tour spokesperson declined to comment on any of these details. Though we know some of the players who have requested releases.

They include Lee Westwood, who confirmed his long-assumed interest at the British Masters, and Sergio Garcia, who was caught saying he “couldn’t wait to leave this tour” at Wells Fargo.

Garcia was at the end of an incorrect ruling at TPC Potomac at the most recent event on the PGA Tour schedule and said “in a couple of weeks” he wouldn’t have to deal with the Tour anymore.

Golfweek quote a PGA Tour player who spoke on the condition of anonymity. Players who choose to ignore the PGA Tour’s denials would be subject to disciplinary action, sparking litigation.

This unnamed player said: “I’m for sure weighing up the pros and cons of making a jump like this. What Jay [Monahan, the PGA Tour commissioner] decides is a hugely important part of that.

“Asking permission to play an international ‘tour’ event is something I’ve done with the PGA Tour since I first took my card many years ago.

“I understand the initial construct of this LIV tour was destructive in nature if the PGA Tour didn’t want part of it.

“Here in the short term, the events are being scheduled to be as non-conflicting as possible which is difficult to do.

“As a player who plays multiple tours, conflicting events is something we always deal with and I don’t see how the LIV tour is any different until it’s 48 guys locked in for 14 events a season.”

The deadline for PGA Tour members wanting to play in the second event of the LIV Golf Invitational Series is 17 May.

That event is being held in Portland, Oregon, at Pumpkin Ridge Golf Club.

In total, the series will hand out $255million in prize money.