WATCH: Tiger Woods CRACKS UP as Matt Fitzpatrick puts up another W for England 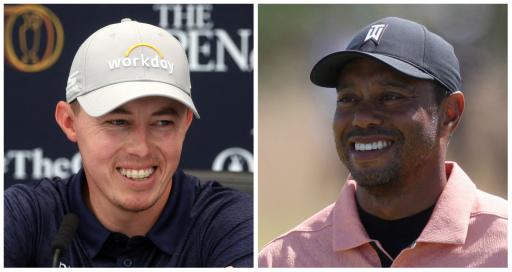 Tiger Woods didn't appear to be in the best of spirits in his media conference before the Hero World Challenge.

It was understandable, given that he was forced to withdraw from the tournament after he developed plantar fasciitis.

Because of that, it's likely he was a little bit ticked and he used that frustration to vent on more than a few subjects on Tuesday.

First there was Woods, 46, calling for Greg Norman to step down from his role as LIV Golf commissioner.

Once that is done, Woods called for LIV to drop their litigation. The PGA Tour can subsequently halt theirs and then both sides can talk "freely".

Woods also bit back at Phil Mickelson, suggesting that Lefty does not need thanking after the PGA Tour increased their prize purses.

Tiger took part in the Hero photoshoot despite WD’ing from the event. Didn’t look too happy with his wedge game! pic.twitter.com/NnoHyazmCw

A short time after his media duties, Woods hosted the Hero Shot.

Fitzpatrick won this with a slam dunk in front of Tiger. And it left Kim absolutely devastated. Just take a look at JT rubbing it in as Tiger gives props to Fitzy.

The Hero World Challenge begins on 1 December. Woods was replaced in the field by the Austrian Sepp Straka.

Here are the tee times for R1 in Albany, Bahamas: