Perhaps the 15-time major champion already knows which tournament he is targeting for his comeback? 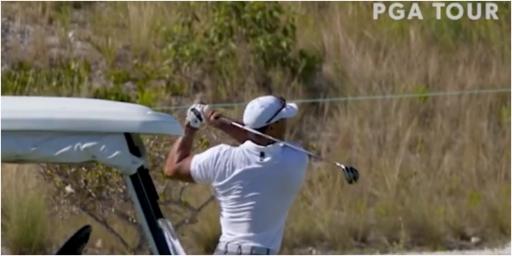 What a whirlwind few days it has been with a comprehensive update from Tiger Woods and his future in golf.

He's able to "participate" in the game of golf again but to what end he does not know. Or at least he won't tell us.

When will he return to the PGA Tour? Which major will he target first? How long will it take to build up his endurance?

Perhaps Woods, 45, already knows the answers to these questions and is just underplaying it.

Judging by this video it's hard to believe it was only nine months ago that he was pulled from his luxury SUV.

Woods is pictured at the back of the range at the Hero World Challenge striping some fairway woods.

Just tell us again Tiger that you aren't prepared to climb Mount Everest one more time?

Amputation was reportedly on the table but Woods did not dive further into detail about the extent of his injuries.

If this is today it’s on.

Woods said all the questions about the car crash have already been answered.

With respect, they have not.

But it's good to see Woods healthy again, and hitting golf balls in Albany, Bahamas as the tournament host of the Hero World Challenge.

Looking closely at the clip from the PGA Tour you can see he's even got the big stick out.

He's making his way through a large bucket of range balls and his arms look absolutely massive.

While leg day was off the table for Woods in his recovery, he certainly never skipped an arm day.