The PGA pro who caddied for Tiger Woods at Southern Hills during his practice round describes the chaotic scenes. 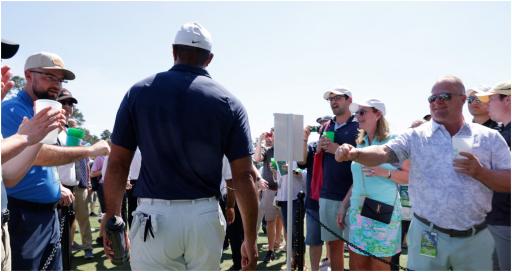 Picture the scene. You are golf professional on an ordinary day when your phone rings and it’s someone from the PGA Tour telling you Tiger Woods is coming to your golf course and you have to "run point".

That’s exactly what happened to Cary Cozby a few weeks ago and he had to keep it secret that Woods was coming to Southern Hills for a practice round ahead of the PGA Championship.

Woods, 46, has not confirmed whether he will play the second major of the year in a few weeks’ time but it looked like he had no problem walking 18 holes.

Cozby has been giving the details about what went down before Woods arrived. Cozby, who was the 2016 PGA Professional of the Year, ended up carrying for Woods.

He joked that he thought he was going to get fired on the fourth tee as he had already dropped Woods’ towel and forgot to rake a bunker at the third while chatting to one of Tiger’s team.

Cozby joined SiriusXM PGA Tour radio where he described the chaotic scene and back story.

“It’s amazing what he has to deal with on a daily basis,” he said.

“He came through the gate. He didn’t even come to the clubhouse because he knew what he’d have to deal with and went straight to the range.

“They sent a text said, ‘Hey, we’re on the practice tee. I’ll meet you on the first tee.’

“And of course our clubhouse is open so we probably had 20 people, the patio, the golf shop’s right off the first tee.

“So there were probably 20 members that slipped out there to watch him.

“He didn’t look up, hit his shot. Second hole, there’s a helicopter.

“Fourth hole, there’s 50 to 70 people up on the hill overlooking that hole.

“And by the time we get to six there’s 30 to 40 people in the trees across the street with television cameras and phones and pictures, and ‘We love you, Tiger. Go get ’em, Tiger. Great shot, Tiger.’ Just amazing.”

"There's 30-40 people in the trees...with television cameras and phones"

Southern Hills Professional Cary Cozby caddied for Tiger Woods yesterday. He described the wild scene to Michael Breed on A New Breed of Golf.@MichaelBreed I @TigerWoods I @PGAChampionship pic.twitter.com/uyOJVO4Ysc

He contined: “He never once swung anything out of perfect rhythm. So he never went out of shot.

“Some things I just noticed, like his grip is perfect. It’s just perfect. And he never missed one shot anywhere close to an inch left to where he was looking.

“If he missed it, just hung a little to the right. I went through every shot, as you might guess, last night just thinking about it.

“And it was, if he missed it, he just hung it a little right. Or he just misgauged the wind. It was windy yesterday.

“And I think he hit one shot that, it was heavy and Rob goes, ‘The wind got that.’ He goes, ‘No, I hit a shot with my six iron instead.’

“So that was about the only shot that wasn’t just on the button. And watching him pitch around the greens, I can tell you this, I was pretty nervous holding that putter.”

Before he ended the call, Cozby added: “It looked like the Beatles were here when we walked off 18."