Tony Finau along with players and caddies were spotted wearing green ribbons on their hats at the Sentry Tournament of Champions. 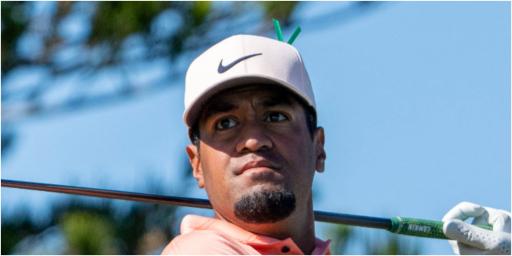 Tony Finau is seen as one of the good guys on the PGA Tour and he had reason to be emotional this week.

Eagle-eyed viewers watching the adverts coverage of the Sentry Tournament of Champions may have spotted this.

They were doing so to express solidarity for Finau, 32, and his family.

Alayna Galea'i-Finau, Finau's wife, shared posts of players wearing the ribbons in their hats on her Instagram page.

"Green ribbons on the course for Dad," she wrote.

"Words can never express how much this means to my family and I, & how grateful we are!

"A month ago, Dad was so excited planning for Maui. From the bottom of my heart, THANK YOU all, for this beautiful tribute & carrying Dad w/y'all on the course today."

Finau, who is highly thought of in the golf world, wrote solemnly: "Grateful for all the guys and caddies who willingly participated.

"Mourning with you babe."

Finau has been known for his generosity.

Tommy Fleetwood's caddie Ian Finnis gave him a good-guy endorsement last year when Finau offered him a ride when he was stuck.

Finnis ended up going for a meal with his team.

"Just to note there would be VERY FEW players on the PGA Tour who would do that. When people say he's a good guy, he's one of the best! Could not hold him in higher regard," Finnis wrote on Twitter.