Matt Wallace and Beau Hossler were putting in some work on the range at TPC Scottsdale at the WM Phoenix Open when this happened. 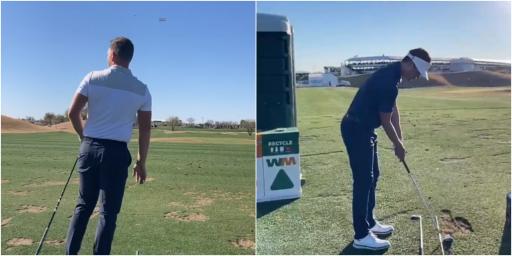 PGA Tour pros Matt Wallace and Beau Hossler were distracted on the range at the WM Phoenix Open but for very different reasons.

Wallace, 31, posted a video of himself on Instagram practising his driving when you can hear a roar from the distance.

That roar was for Sam Ryder's epic hole-in-one on Saturday evening on the PGA Tour. It was absolute chaos.

As the camera pans round in the 24-second clip, you can see the beer cans go flying at the famous 16th hole.

Ryder, 32, sent his tee shot straight over the pin to the right of the cup and spun it back into the hole.

It was the first ace on this hole since Francesco Molinari's seven years ago. Mexico's Carlos Ortiz, also made a hole-in-one 24 hours later.

Play was suspended on both occassions for several minutes as staff at the event had to clear up the debris. Well, it is the Waste Management.

Who is Sam Ryder?

Who is Carlos Ortiz?

Hossler, 26, was also putting in the work on the range. Yet he was stopped (presumably) by his caddie from hitting the ball here.

The American had missed the cut and was putting in some work on his irons, not far from the 16th hole at TPC Scottsdale.

Well, that could have gone incredibly wrong. Hossler is still looking for his first PGA Tour victory, having turned professional in 2016.