Callum Davison, who uses the left-hand-low method, is making his PGA Tour debut at the RBC Canadian Open. 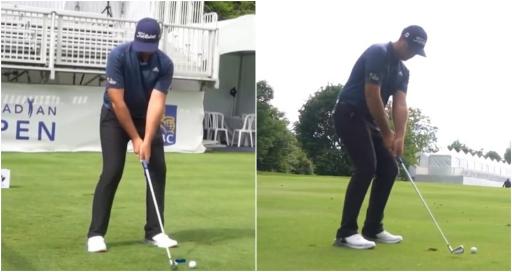 When you're watching the PGA Tour's coverage this week of the RBC Canadian Open, keep your eyes peeled for Callum Davison.

Davison is making his PGA Tour debut at St. George's G&CC in Toronto and the interesting thing about him is that he plays the game cross-handed.

Not just with his putter, like many do, or on shots around the green like former World No.1 Vijay Singh once did or like Matthew Fitzpatrick does. It's every shot.

The left-hand-low method appears to work out extremely well for him. And if I'm being perfectly honest, it's gnarly to watch. Just how does he hit the ball?

On the PGA Tour's Instagram page, they spoke with Davison and even filmed him striping a few shots.

Fan favourite Harry Higgs commented that when he tried the method for himself, he "dead shanked it into a tree". He added: "Have a great week!"

Apparently, Davison has played this way ever since he picked up a plastic club when he was a toddler.

That is not an unfamiliar sight when watching little ones grasp clubs for the first time. They are heavy.

Davison previously told The Star that he did try the conventional method but it just didn't click and he ended up just ignoring the confused faces of observers.

"My dad was never a guy who was going to make me change, so I feel like he didn't force me to do it and I felt comfortable with it. So I looked at it as: Why would I change?" Davison told the publication.

"I honestly was never going to change. There were times when I thought: What if I change? But I never really gave it a real go of trying to swing with a normal grip. I always just thought: What's the point?"

He added that his swing "brings attention" which can be "a bit annoying" for the 21-year-old.

"But at the same time, it's a positive. It's better that people know who you are than not."