PGA Tour pro Webb Simpson has revealed how Tiger Woods spilled the beans he was going to be a Presidents Cup vice-captain when he was buying hot dogs. 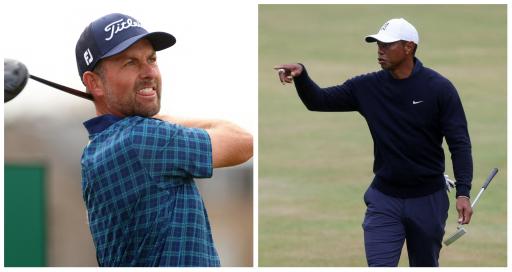 PGA Tour pro Webb Simpson has revealed he was "stressing" about ordering hot dogs with his family when Tiger Woods spilled the beans he was going to be a Presidents Cup vice-captain.

Simpson, 36, a seven-time winner on the circuit, was revealed as one of Davis Love III's vices for the showdown with the International Team at Quail Hollow yesterday.

Love has also added Steve Stricker to his team of staff alongside Zach Johnson for this year's matches.

The captain confirmed the news in what can only be described as an interesting press conference where the 58-year-old spoke in-depth about LIV Golf.

According to Love, he suggested that a "nuclear option" could be triggered by PGA Tour members.

That option? A boycott of PGA Tour events if LIV Golf players successfully sue the Tour and are allowed to "cherry pick" events as and when they please.

That will simply not cut the mustard. Read more about his thoughts here.

As for Simpson, he revealed that it was the 15-time major champion Woods who spilled the beans about his vice-captaincy.

The 82-time PGA Tour winner famously told the United States side to "step on their necks" when they opened up a lead heading into the Sunday Singles at the last Ryder Cup.

Simpson told the media: "It was last Tuesday and I was actually in Wilmington, North Carolina, with my family and we were at Trolley Stop, our favorite hot dog joint.

"My kids had already made the owner mad because they continued to open the door, so I'm stressing, it's my turn to order, my phone rings, I looked down and it's Tiger.

Simpson is competing in this week's Wyndham Championship on the PGA Tour, which you can live stream for free online.

He continued: "It meant a lot, but honestly, I got done with the phone call and I'm like, I don't know if that was official or not. I don't know if he meant like he's rooting for me to be assistant or if I am assistant.

"So I just waited, and I saw Zach on Wednesday, or I guess yeah, the next day in Detroit and Zach and I had a laugh about it. I said, Davis still hasn't called me, so I don't know. And then Davis gave me a shout I guess maybe the next night.

"But yeah, not that I feared not being a part of it, but there was a part of me that's like, if I don't make the team and Davis goes a different direction, that's fine, but it's going to be hard to see the Presidents Cup happen there and not be a part of it in some way.

"So I was really, really relieved to get a chance to be a part of it."