Davis Love III on rebels: "They don't understand the players make the rules"

Davis Love III says he could see a scenario where some PGA Tour stars boycott the majors if LIV Golf players are allowed to play. 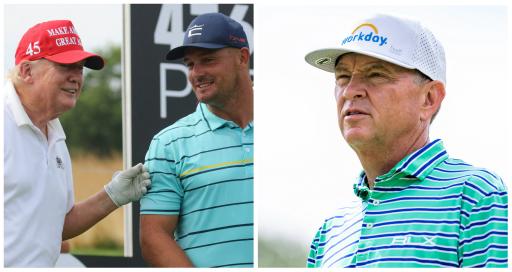 It's fair to say Davis Love III is a little bit annoyed at LIV Golf.

Of course, his frustrations more than likely emanate from what the Saudi-backed series could do to the Ryder Cup and the Presidents Cup.

And the current U.S. Presidents Cup captain believes it is not outside the realms of possibility that a group of PGA Tour players could boycott a major if a solution to LIV isn't found.

The Great White Shark said that he met with OWGR chairman Peter Dawson in Scotland over the 150th Open Championship to discuss the situation.

He wants Jay Monahan, the PGA Tour chief executive and others who have said "negative" things about LIV to be excluded from voting on their application.

If LIV were to gain OWGR accreditation, it would form a pathway to the majors for their players. At present, the banned and suspended players face the prospect of sliding down the rankings and not being eligible to play in them.

Alternatively, they'd have to play on other tours, such as the Asian Tour, to qualify.

Related Articles
IT'S WAR! Report suggests golf's big wigs to meet at The Match to counter LIV
Cameron Smith on missing out on World No.1: "It's a bit of a pain in the bum!

"But if a group of veterans and a group of top current players align with 150 guys on the Tour, and we say, 'Guess what? We're not playing,' that solves it, right?

It's clearly a headache for the majors. What should they do? What do you think they should do?

Love, who has captained the U.S. in the 2012 and 2016 Ryder Cup, explained to Harig that he tried to convince some players that they would be making a long-term mistake by committing to LIV.

He said he asked them if they were comfortable with never playing a Ryder Cup or Presidents Cup ever again.

"What they don't seem to understand is that players make the rules. So we can strengthen the rules rather than loosening the rules, right?"

He also said that he's asked other players if they will be defecting.