Dustin Johnson held nothing back with this tricky shot during Friday's second round at the Valspar Championship on the PGA Tour. 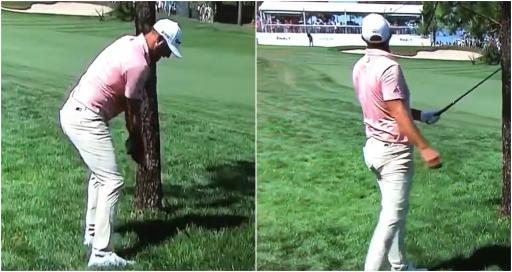 Dustin Johnson had one of those moments during his second round of the Valspar Championship on the PGA Tour us mere mortals dread.

Johnson found a bit of trouble on the par-4 ninth hole at Innisbrook during Friday's second round. He was stuck in the cabbage, behind a tree after an errant drive.

He is a former World No. 1 and Masters champion, so he was clearly not going to be fazed by this shot. But for us, it is the type of shot we dread. The cost of replacing snapped shafts isn't cheap.

During the Golf Channel broadcast, the on-course commentator Notah Begay III remarked: "When I walked up, I was like, oh, god, this could be a broken shaft just because — DJ's not the type of player that's going to back off from a shot like that."

Even David Feherty chimed in: "That's a dangerous shot". Johnson, as you can imagine, swaggered over to his golf ball and didn't seem all too fussed.

He got to the top of his back swing and then unleashed fury at the ball, clattering the tree after impact and took a few steps away.

Feherty said that Johnson "went right after it". "Yeah, he got a lot of power out of it. Modified finish and it just snapped back off that tree trunk."

Johnson eventually chipped onto the green and unfortunately could not save par. But that bogey, for us choppers, would have been a whole lot worse.

He ended up making the cut, but was well out of contention to win.

Still, it's shots like that prove why he was a World No. 1.

Never afraid of the outcome, just committed to the execution of the shot. As he'll tell you, you'll either hit a good shot or a bad shot - so why waste time?