Paul Casey was asked about not having a signature win in his career. This was his response. 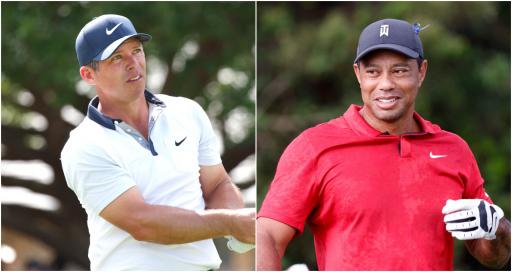 Tiger Woods was on the mind of Paul Casey before the 2022 Players Championship.

Casey arrived at TPC Sawgrass as a 44-year-old top professional still chasing that "signature" win in his career.

Even he thought as much after Paul McGinley's comments he made about Casey on the Golf Channel were put to the Englishman.

For all the excellence of Casey in winning multiple European and PGA Tour titles, that standout - legacy defining win - escapes him.

But that major has alluded him. To date, his best finish in one of the big ones came at the 2020 PGA Championship where he finished second.

His best finish at Augusta National came when he finished fourth at the 2016 Masters. The Open? T3. The U.S. Open? T7.

McGinley's thoughts were put to Casey during his press conference at the 2022 Players Championship.

"Is Paul right? Probably. I don't spend too much time thinking about it. It's his job to talk about it. I don't disagree with him, though," he said.

Then Casey's attention turned to Woods, 46, who was recently inducted into the World Golf Hall of Fame at PGA Tour headquarters.

"Guys have been talking about Tiger a lot this week, obviously, and I reminded -- I think Viktor Hovland sat there, and he goes, 'what was it like?'" said Casey.

"I said, you've got to remember, Viktor, I was playing 15 events over here and it was four majors, four WGCs, The Players, Bay Hill, Memorial. There wasn't a lot of opportunity to win much. And if he didn't win, it was Vijay or Ernie or somebody else. That's the way it was.

"I'm very proud of my career has been as long as it has and I've still got opportunities to win against the youngsters."

Related: McGinley says "big boy" Mickelson can look after himself

This is Casey's 22nd year as a professional, although he is without his trusted caddie Johnny "Long Socks" McLaren.

The pandemic took its toll on the carrier. Did Casey try and talk him into coming back?

"No, I didn't. Johnny may come back. It was always a sabbatical. It was burnout. More time at home with the family.

"The stresses of flying back to London every weekend, and if he's going to test positive for Covid and be in a hotel and all that stuff. It was just stressful for him. I'm sure I was stressful for him, too.

"Everybody knows that we finished our six years together better friends than when we started, which is saying a lot.

"In this industry that can't always be said. We've seen a lot of people who are "mutual agreement" or "taking a break," which we all know is code for somebody got fired.

"Just nobody ever says that, but Johnny and I can generally look anybody in the eye and say, we're great mates and he just wanted a break, and I fully support that."